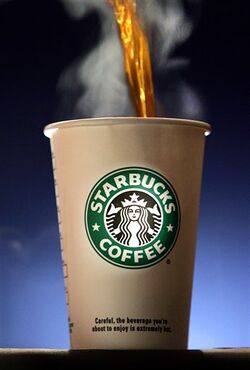 A 1932 Starbucks promotional image for a cup of GI Joe.

In modern times, cup of Joe is often used as an alternative to saying "cup of coffee" or just "coffee". However, before it was used as a synonym, in the 1930s, a cup of Joe was actually a cold beverage made from the leftover bits of the sub-group of Humans known as the 'Average Joe', with a hot drink counterpart made from GI Joes.

In 1931, a coffee enthusiast from Minnesota went for a hike in the mountains. While trying to walk up a steep cliff, he injured his leg. After not being able to call for help on his cellphone since they had not yet been invented, he instead opted to just scream and shout, hoping that someone will hear him. Luckily, someone did hear his cries for help. Unluckily, it turned out to be a cannibal. The cannibal then transported the injured hiker to his cannibal camp, which was later discovered to be a treehouse in one of the cannibals backyards. While with the cannibals, who the injured hiker did not yet know were cannibals, he asked for a cup of coffee. He was then given a cold, watery liquid that was a mix of the colours red and brown. Thinking it was coffee with strawberry syrup or something, he drank the beverage and loved it. When he asked what it was, the cannibals replied with "cup of Joe". Thinking it was a nickname of a drink, the hiker pressed for more infomation. "Joe?" he asked, "what is a cup of Joe?". One of the cannibals then picked up a white blanket and underneath was a dead body. "Joe," the cannibal replied, pointing at the body. Instead of freaking out, however, the coffee enthusiast had a great idea.

With hiring the group of cannibals as his first batch of barristers, the now first owner of a Joe cafe opened his doors for the average American to have a cup of Joe. Within the first two months, the public loved their cups of Joe. Raking in cash, more Joe cafes were opened around the country. However, a problem occured; there was not enough average Joes in supply to keep up with demand of cups. So a new beverage had to be made, one that used not so average GI Joes. This new hot drink was also extremely popular.

The last cup of Joe[edit]

In 1942, of nearly a decade of being the King of the cup of Joe industry, the former coffee enthusiast, whose name was still unknown, went bankrupt after all the average Joes and GI Joes went extinct from all the cups Americans were drinking daily. In order to perserve his seat in history, he finally revealed his name to the public — Joe. Yes, the cup of Joe guy was named Joe the whole time. He devised a plan. He would sacriface himself to be the last real cup of Joe and afterwards, the cup of Joe will just be normal coffee. It was genius — as Coca-Cola would use the same basic plan for their soft drink beverage when they changed recipies in 1985. In January 1943, Joe became the last cup of Joe, and ever since, a cup of Joe has just been coffee.

Ever since the demise of the cup of Joe industry, purists have been secretly making their own cups of Joe in their garages and basements. Many of these people are arrested for murder before they can actually turn their kill into a cup of Joe, though.