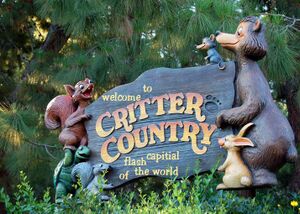 Critter Country's Welcome Sign, brandishing the title of "Flash Capital of The World". 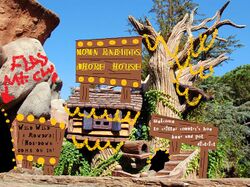 In the late 1800's the Albino Big-Bird tribe discovered a large dead tree. They set up a small village inside it's large hollow interior space. Soon, other tribes came to the tree and set up villages. By the 1920's, the land that the tree sat on was declared critter country. In the mid 1950's Walt Disney, a deranged Nazi psychopath showed up in critter country, and attempted to claim the land. The Critter Country special Opps. Unit was dispatched on him, and the brought him to the critter country court of criminal intent. He was charged for being a cocky, self-centered Nazi racist. Walt pleaded an offer to the court. He said that the surrounding land of critter country had already been bought by him. He claimed that if they joined the Mickey Mouse League, he would let them live in peace. The critter country council decided that the deranged Nazi lunatic made a good deal, and by signing some papers, Critter Country became an official member of the Disneyland Confederation.

After signing a peace treaty, critter country became one of the Disneyland nations.They soon were flooded by urban development, night clubs, whore houses, Broadway theater, gang violence, and drug dealing. The Albino Big-Bird clan decided to fight for there freedom. The critter tribes began to round-up forces over a period of time. Meanwhile, some of the critters were enjoying the new exciting nightlife. Clubs like Moma Rabbits Whore House,Falsh Mountain Strip Club,Wild Wild & Rowdy's Hoe-Down,Mother Hen's Chicks for pleasure,and THE Brer Rabbit's Rainbow Crack pond were everywhere. The discovery of hash and booze was a milestone in modern critter country culter. Everything was flashy and colorful at night. Even a number of Gay-community clubs formed due to the inbred nature of many of the original tribes. big parties were normal occurrences, and fat, sweaty, middle-aged tourists were a common sight. 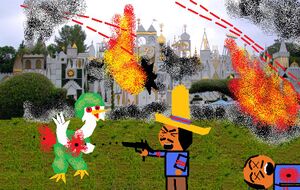 The Forgten Disneyland Civil War.Shown here, the battle of Fantasyland field, with the Albino Big-Bird Special Opps. Against the Small World Mexican Gang.

During the early 1970's Disneyland was under attack from the inside out. The Critter Country army was invading Fantasyland in order to capture the Disneyland capital. They were halted thought by a few battles. The first was the battle of Fantasyland fields, were THE Brer Rabbit was able to pull the army through, killing all of the It's A Small World Dolls. The next battle was against the character army of Disneyland security. The critters were no match for them, having just won a extremely hard fought battle, and surrendered. They headed back to there nation of critters and remained quiet. They began to find ways to get along with everyday life in the flash capital. They soon returned to peace with Disney.

Today, critter country is a quiet laid-back place in the daytime. At night, it turns into a loud colorful adult entertainment strip. The land of critter country produces a natural high into it's atmosphere, and most people there are fairly welcoming. The majority of the daytime crowds are families watching retards plunge into a thorbush of the side of Falsh Mountain. The land has history, excitement, thrills, and the world's 100% best Weed.