Covered in sticks, mud, and other animals' shit 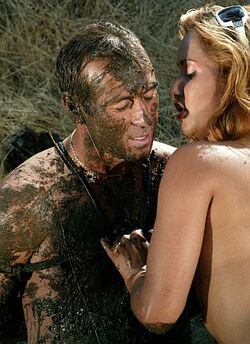 “I would often return to my primal condition, one that made me feel like I was thoroughly loved by the disgusting elements of society.”

~ Oscar Wilde on being dirty

Being Covered in sticks, mud, and other animal's shit is a form of ritual celebration in many tribal cultures and a form of punishment and humiliation in Western non-civilization. A device that can be attached to computers and activated over the Internet results in the intended recipient being covered in the aforementioned material was an important precursor to the development of the machine that made it possible to communicate with computers (see Internet). It was also used heavily by many tribal cultures wishing to live in the civilized world while still maintaining their extreme heritage.

Sticks are generally derived from trees, though exceptions have been noted. Pointy or thorny sticks often produce the best results. Mud is an essential ingredient because it binds everything into a cohesive paste, possessing binding qualities lacked by both sticks and other animal's shit. The animal shit is traditionally sprinkled from a height.