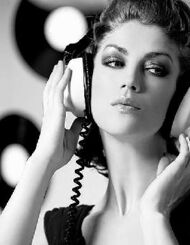 We had some nice sex.

Beyond any of my expectations, I got a call from D.J. Kelly, author of several "scientific" journal publications. She said she was greatly amused by my previous analysis of one of her publications. We eventually ended up going on a date. As it turns out, this D.J. Kelly person is, in fact, quite hot, to say the least. I also learned that she actually makes money through writing these supposedly scientific reports.

Anyhow, I was fucking her hard when she presented to me her latest work: "Comparative evaluation of the indirect immunoperoxidase test for the serodiagnosis of rickettsial disease." I was immediately blown away by its utter brilliance.

Just the names of the coauthors made me laugh out loud: P.W. Wong, E. Gan and G.E. Lewis Jr.

And then that first sentence:

An indirect immunoperoxidase test was compared with an indirect fluorescent antibody test and the Weil-Felix OXK test for serodiagnosis of scrub typhus by measuring the rickettsial antigen specific activity of IgG, IgM, and whole globulin.

A magnificent example of how scientists speak in a completely nonsensical language. "Weil-Felix OXK test" WTF?

In the following lines, D.J. Kelly continues using these scientific "terms" in order to uphold her "scientific credibility":

Obviously. What else did you expect than that Weil-Felix test to be utter crap? Just look at the names! What kind of self-important pricks would name some lame test after themselves? And what kind of lame names are Weil and Felix? Hah! At least the inventors of those indirect fluorescent antibody and indirect immunoperoxidase tests were smart enough to choose some complicated, scientific sounding name. Of course, the names are so complicated because they wanted to show off their supposed brilliance. Still though, at least they didn't put their own motherfucking name on it!

Well, my honey bunny does know how to imitate those insufferable douchebags. Amazing, I tell you.

Oh, and the conclusion reads:

Well of course it does. This was all self-evident from the very beginning.

Just what is science all about?

Does this make any sense to you?

Scientists are actually quite retarded. I mean, they don't understand anything at all. They need all these stupid theories, and it all has to be "falsifiable". And they always use this idiotic "scientific method". And to make matters worse, that whole bunch of scientists strictly adhere to whatever is the current ruling paradigm, so they are completely incapable of moving beyond their primitive understanding of things. Science would make a lot more sense if scientists would stop being so damned autistic and act normal for once.

See? Even when she's intoxicated, she talks more sense than any of those stupid scientists. That's why I love her so much.

Here are the results of my extensive analysis, displayed over one of Kelly's beautiful breasts: 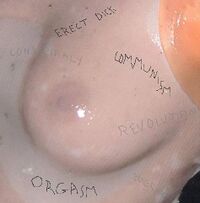 It appears the paper is not semen-proof, as the original text has become completely unreadable.
Interestingly enough though, there were these subliminal messages appearing all over the paper.

We had a good laugh over it.