A chimpunk is, quite simply put, an enviromentalist with a fondness for punk music performance. 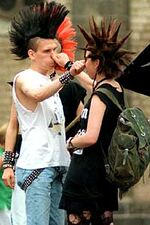 Chimpunks live in trailer parks until they die. In their teenage years they undergo a metamorphosis and become emo kids temporarily. Some never fully outgrow this stage and become Emo Chimpunks, which we will cover. During this emo stage, they become overly interested in environmental issues. Teenage chimpunks can often be seen protesting in front of the White House demanding a reduction in global CO2 emissions. They are quickly disregarded as "angst filled youth" by most who see them.

When the chimpunk matures, he or she usually takes an active interest in punk music and one of the four chimpunk instruments. Around the age of twenty they form bands and write songs about environmental issues. They never get bored of this, and while the general public generally stops giving a shit about a chimpunk band even before they release their first album, they keep writing music until they die. Retirement is not known among them. The leading cause of death among chimpunks is assasination, along with wild animal attacks.

The preferred fashion for chimpunks is S&M gear. However, some individuals may be spotted wearing heavy winter coats made of the skins of baby rabbits. Chimpunks do not like removing their preferred clothing and may even shower in such clothes.

A chimpunk can play one of these instruments:

Here is an example of excellent chimpunk lyrics by the XGorillas: (not to be confused with Gorillaz)

You're destroying the rainforest one tree at a time

Can't you even recognize your heinous crime?

Don't you feel pity for all those animals you kill?

This masterpiece won the XGorillas a Granny in the 2008 Annual Environmentalist Music Awards.

When playing the air guitar, chimpunks tend to stand in a power stance. During concerts, they do not switch positions at all and remain in a power stance for hours. This helps make chimpunk concerts extremely boring.

Chimpunks do not play on normal drumsets. They simply put different sized can lids on several stands, and use plutonium rods as drumsticks. Researchers are currently trying to find a link between the low life expectancies of chimpunk drummers to their use of plutonium rods.

Commonly regarded as the wisest chimpunks of all, the bass players can usually be found affectionally stroking their fish in their spare time. For the most part, they fail to notice when their fish dies, and they may continue playing with it for days until the smell of it becomes bothersome enough to drive them to obtain new fish in the local stream. However, because of the indescretionate disposal of plutonium rods by the chimpunk drummers, it's usually very difficult for the unfortunate bass players to find new fish to play with. 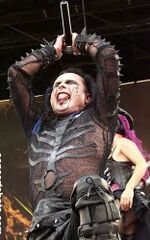 These chimpunks generally have very short-lived careers. The ferociousness of their lyrics and pure volume at which they sing generally ruins their singing careers after only several years. At this point, the screeching chimpunk vocalist is either kicked out of the band, or continues to perform by using angry hand gestures. This usually does not go over well with record producers, but instrumental lovers can still enjoy the sound of raging chimpunk fury at their live performances, where the anger is shown just as effectively, but without words.

One of the things that makes emo chimpunks cry

Emo Chimpunks are extremely rare and their existence is commonly questioned. They tend to form bands but their songs of protest usually are futile. The lineup of the bands consists of at least four acoustic guitar players and one screeching vocalist. The bass players who want to join an emo chimpunk band let their fish swim free until it is eaten by a grizzly bear, which prompts him/her to write angst-filled lyrics about the unfortunate experience.

Unfortnately for all chimpunk bass players, the bass sometimes die. If this happens, and if the bass player is an emo chimpunk, he cries a river until more bass swim up the river and he can catch them and play with them. Regular chimpunks simply go fishing for more bass, and if they fail to catch such fish, they may become desperate. Such chimpunks have been known to play with trout, salmon, sharks, and even lobsters. Of course, such fish usually produce strange and sometimes unearthy sounds when slapped, so some chimpunk bands have permanently adapted the use of these unusual fish to their music to create Experimental Chimpunk music.