Do you have an irrational, yet somehow compelling grudge against all of humanity, or even just some sections of it, like France, for example? Perhaps you have a point to make, but writing letters just doesn't cut it, and a big explosion would really help people to get the idea. If this is you,the Capybara bomb might be just what you need. 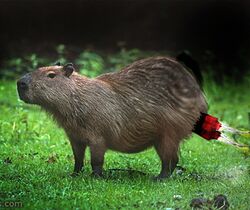 This test image shows how the noble animal remains blissfully ignorant right up to the moment of detonation.

The Capybara bomb is a surprisingly successful stealth weapon composed of:

Ah, the capybara, my old friend how you lollop through life, swimming in rivers and snuffling dung, all the while unaware that TERRORISTS! are seeking to use you in their nefarious plans. Never mind. Let's take a closer look at the furry little dope.

The capybara (Capibarious Capibara) is a semi-aquatic herbivorous animal with a brain the size of a tangerine. Full-grown capybarae reach between 105 and 135 cm (40-55 in) in length. They are peaceful, fun-loving creatures that like dancing and poker. They look like giant guinea pigs.

Most importantly, however, the average capybara can safely hold up to 7 sticks of dynamite.

Any old dynamite will do. Just wash it, shove it in and go.

Apart from the Capybara, the only animal bombs used by terrorist organisations are cats and giraffes.

The cat bomb has not been much of a success. Try and shove some dynamite in a cat, and it's likely to go mental, ruin your furniture and then explode prematurely as a result.

While the giraffe can hold a lot more dynamite than a capybara, and is generally philosophical about the whole thing, they are unfortunately much harder to smuggle through customs.

So, my friend, when considering which animal to convert into a bomb, think capybara.

A capybara bomb can be used pretty much anywhere but they are especially useful for TERRORISTS! who hate zoos. The range and damage capabilities of the device are limited to around 1 metre (3.2808399 feet). This is good for blowing up telephone boxes, small cars and litter bins.

If you want to blow up a really big thing, then you'll need more than one capybara. A whole lorry load of capybarae could probably bring down a Wal-Mart, but if you're stopped for any reason, it's going to be really hard to come up with a sufficiently good reason as to why you are driving a consignment of 500 capybarae with dynamite up their asses, to the Wal-Mart.

Neither Uncyclopedia nor the original author of this article condone cruelty to animals.

(Kermit, Ms. Piggy, and that Swedish Guy however, are fair game.)