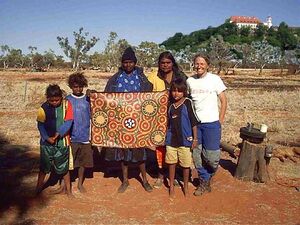 The people of Brno

It's located in the south of the region, near the Sunni - Christian border (Brno still belongs to the Sunnis), and well know for it's oriental culture. The main sight here is the Špilas castle - a castle among the huts of poor Moravistanis. It was built in the age of Ottomaniac rule, when Islam spread in Moravistan (up until that time Ancient Moravia). In 1918 when it joined Czechoslovakia, the city's poor health standards, draughts, plagues and other diseases came to whole world, but firstly to Spain, so that's why Spanish flu is called Spanish, althrough it truly comes from Brno. Today it's also popular because of it's culture - a mixture of Arabian (borders of Saudi Arabia are only 30 km to the south), Armenian, Georgian, Coatian, Czech, Slovak and other cultures. In the last 80 years, thanks to the help from Prague, Moravistanis in Brno now know what is education, electricity, automobiles and trains. Since the Czech Republic entered European Union, now all countries of EU are helping this backward village to get rich, althrough its economic strength is still about 5% of EU's average. (Less have only Poruba, Most-Chachanov, Zábřeh, Záhřeb and Moravistanačka Gračanica)

A state-of-the-art subway system was proposed to partially replace the extensive network of šalina lines but its realization had been postponed, until the disputes over the position of the main train station and the distribution of bribes get resolved. Minor resistance to this vision among the majority of the inhabitants is a part of local folklore and is no real obstacle to Progress.

War preparations were huge. The simple-minded widlaks became enthusiastic, and every man over 16 years was drafted to the so-called "Army of Brnenian Salvation". They armed themselves with rocks, javelins and widles (horrible multifunctional weapons of mass destruction and dung-handling). The Great Attack itself begun on the 1st of September 1997, because on this day people of Prague sent their children to institutions called schools. The purpose of these buildings remains unknown to Widlaks of Brno, but nevertheless they thought that with their children away from home, people of Prague would be vulnerable and easy to conquer. The entire Army of Brnenian Salvation boarded armored battle šalinas and set off towards Prague. Unfortunately, they realised that their rails end in village fields, so their Great Attack was crushingly unsuccesful. The disappointed rednecks turned against their masters, massacring the whole society of United Widlaks of Brno, then returned to their farms as usual.