Asteroids is an antique video game in which the player pilots a triangle while throwing dots at cubist amoebas. Asteroids was conceived by Lyle Rains, and originally written by Edd Log (with help from David Bowie) for Atari in 1979. At that point, the game was a simulator for remote-piloting a robotic white blood cell designed to blast apart cholesterol particulates in the human circulatory system. But after realising that "Cholesteroids" was a terrible idea, Atari was left with a fully-functioning and tremendously addictive micro medical combat simulator, and thusly marketed it as a video game to compete with the likes of Pac-Man and Space Invaders.

Upon release, players praised the game for its addictive gameplay. However, despite its overbearing sci-fi and innocent 70's entertainment themes, professional critics and art deco retailers praised Asteroids as a subtle portrait of nihilism. This is shown by: the empty blackness of space; the lonely duh, deh, duh, deh played near-frustratingly in the background; the overbearing madness and vicious mind-controlling power of the central triangle; as well as the shockingly simplistic graphics, which were, due to a number of reasons, the only material available at the time: 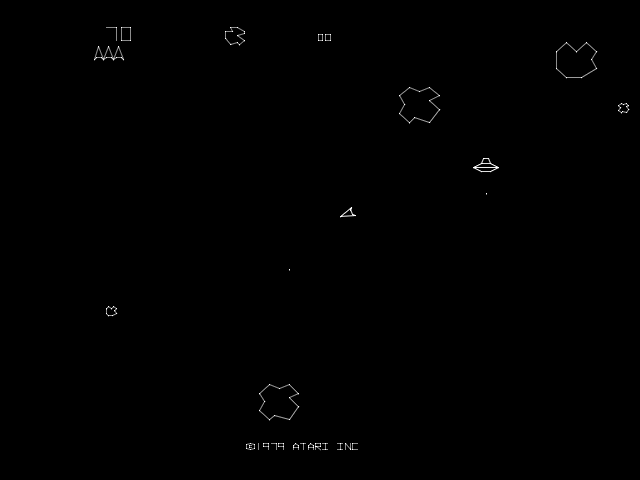 Asteroids was the first piece of 80's nostalgia to be dug up and adapted as a film by Michael Bay, as 1998's Armageddon.