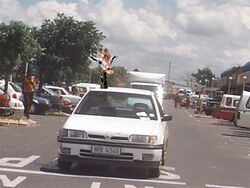 Giraffe suicide predominantly revolves around speeding cars and lions, though in some cases both methods combine.

“In Europe they have assisted animal suicide, they call it Mammalian Euthanasia Royale. With Cheese...”

Everyone is unhappy in the fact that they are all alive. Unhappiness is caused by the unrealised desire to obtain things, people, states, situations, opinions, emotions, and by an unfulfilled need to hold on to the things, people, states, situations, opinions, and emotions we already have. If happiness is the absence of unhappiness we can see that the only truly happy people are dead people, snug in their graves, not a care in the world. Also happy are the badly retarded and people on heroin, though they are covered elsewhere.

Unlike amongst the human population "assisted suicide" for the animal population is available almost worldwide, both in specialised centres called Abattoirs (French for "bloody messy") and through roaming help group activities called Redneck Hunting Parties.

Animals are not unhappy on the whole, they do have difficulties in their lives, specifically issues of survival and mating, besides which by and large the assorted members of the animal kingdom are creatures of instinct and lack the self-awareness necessary in becoming depressed by the weight of one's troubles.

It should be noted however that a handful of animals have achieved some level of consciousness, and have realised that their lives consist mostly of struggling to find food, get laid and not die, before eventually failing at all three and rotting, and in this time not once getting as much as a fifth of what they want. 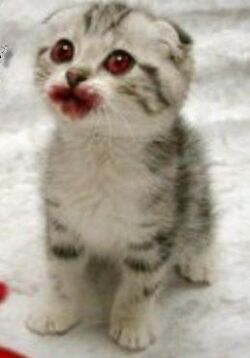 Mice tend to live a fairly rural and pastoral life, running up wheat stalks, and then back down again, nibbling seeds, and occasionally sacrificing themselves to an owl god, in exchange for a bountiful grain crop.

Occasionally mice become disenchanted with their rural life and decide to head for areas inhabited by men, drawn in by the bright lights, the smog, and the reek of rotting kebab meat. at first, the abundance of food and the fun of the urban sprawl enthralls them, but before long the mouse will be in over its whiskers, riddled with disease, hooked on tramp juice, and backed into an alleyway by rat-gangs.

Mice finding themselves in this position face three options: man up and become mousy gangsta pimps, run back to the countryside, prodigal sons, and return to a life of grain and sparrows, or else follow their noses to the nearest spring-trap or poison pile and end themselves. sadly the majority of mice will take the easy way out.

Rats are naturally abhorrent creatures. Born diseased, they spend their lives pissing in your child's sandpit and raping kittens. They live constantly with a dichotomy, the knowledge that they are scum, and the powerful instinctive imperative to mate ceaselessly. as result rats are throwing themselves into handily placed suicide traps at a rate of millions a day worldwide, as twice as many rats again are unloaded from ratty wombs.

Lemmings stand around, for hours at a time, thinking very little, and thinking it in unison. Occasionally one lemming will have an individual thought, like "hungry...", and will begin to search for food, at which point every other lemming in the group will immediately do the same. If the thought which appears spontaneously in the lone lemming's head is "Why, god, why!?", then that lemming may well take his entire flock off the nearest cliff. Technically this would be classed as one case of suicide and many hundreds of cases of "death through misadventure", or "mass stupidity". 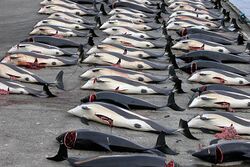 Ritual suicide by method of harakiri by Dolphins on the Faroe Isles in 1982, which may have been performed as a mass protest against the Save the Whale campaign.

Except for humans dolphins have few natural enemies which have led them to develop a bored and listless society punctuated with little other than leaping through hoops for the amusement of yokels. Due to this Dolphin suicide rates are massively high in relation to most other animals. Traditional methods of suicide amongst Dolphins revolve around tuna nets and self-drowning.

Very often dolphins will seek the company of humans where they will beg to be put out of their misery. Humans, in their ignorance, mistake these requests as "cute", when in fact the dolphin is clearly swimming alongside the boat saying "eeeeeeek eeeek eeek eeeeeee eeeee eeeeeek". [1]

Suicide and self-harm are rife amongst many of the smaller animals of the countryside. Toads, frogs, rabbits, foxes and many other creatures frequently seek to meet their end by running in front of cars and trucks. 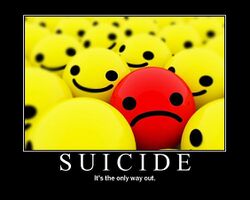 Isn't it time YOU gave in to the urge?

Human suicide is no laughing matter, certainly not. But then I've already laughed at animal suicide, if I can laugh at one and not the other doesn't that just make me a crass hypocrite? Aren't I just picking on the animals? Aren't humans just animals after-all??

Luckily for you, you didn't laugh once at any of the shoddy preceding text, so you can still take the moral high-ground. I, however, am doomed to Hell's fires. As you read the remainder of the article hold your nose in the air, not so high as to make reading difficult, but high enough that even a casual observer - say one in a nearby tree, watching you with binoculars - could see your powerful disdain.

Interestingly, dolphins and kebabs are natural enemies in life.