John Q. Fuckyou, President, CEO and All Around Dick of FUCK YOU Airlines discusses how he would like to convert the nine-across seating to fifteen-across seating on his entire fleet of Fuck You jets.

Airline Management is one of the last bastions in corporate America where two outdated theories still flourish, the first is the promotion of Brown-Nosing, Back Stabbing, Snitching and Tickling, these being the preferred methods for managing and promoting employees to bogus, made-up management positions. The second is the ratio of management to employees.

Airline Management cloaks its true purpose in a quasi-cult dedicated to perpetuating their own importance, raises and promotions - this cult is well known within the Airline Industry. This secretive religion-like body is called Judy Garlandism. An almost fanatical loyalty exists amongst these managers as they work in the shadows to protect not only their own interests, but the interests of their fellow managers.

Only one Airline Manager has ever been known to break the code of silence once they left the industry. This man, known only as "Bruce," made a death bed confession detailing the true purpose of Airline Management. To this day his body has never been found and his very existence has been denied by airline executives.

Airline drones, droning for management which manages their droning.

Airline Management exists for only one reason: to perpetuate their own existence.

Since no other industry would knowingly have more managers than employees the airline industry has determined the optimal management to employee ration should be 1:2; that's right, for every hourly employee there should be two management positions allotted. To resolve this and still appear to be a viable entity the airline industry has come up with a mind numbing list of management positions. This list is one of the most guarded documents in the industry. However, through some simple research we can list some of them here and their true purpose. Some examples are listed here in no particular order:

A. Senior Executive Vice President. Here is a perfect example of a title you can give to almost anyone for the most inane reason - "Senior Executive Vice President of Southern California Customer Relations for Passenger Issue Discrepancy Resolution," for example. Now you may be asking yourself, "What the hell does that mean?" Well that's the beauty of this, no one knows and no one can explain it, but always remember, that guy is getting paid six figures to go to work each day and sleep in his office for 8 hours while you try to figure out what the hell he actually does.

B. Executive Vice President of Operations. See above. An added bonus to these first two entries is to confuse your hourly employees as to which one reports to the other. For comedy value you can keep hourly employees confused for years as you ping pong them back and forth between these two entities while never actually admitting that one reports to the other. The importance of this is so that you don't actually have to resolve any issues that come up and if one of your mindless minions stray and bring in an outside entity to resolve their grievance, then everyone is in the clear because no one officially reports to anyone else, but about 30 managers have some kind of authority over the department with no real responsibility of running it. "It's not my fault, I'm not in charge of that".

C. Vice President. See A and B, but with more direct reports. 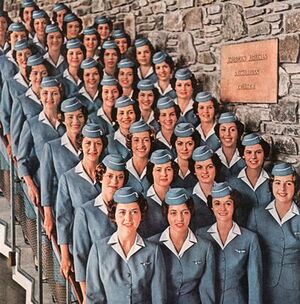 OK girlbots, all at once let’s practice our Business Man's Mantra: "When the captain turns off the seat belt sign, we'll be serving coffee, tea or me!"

Fortunately, the daily operation of running the airline falls to the hourly workers who try in vain to keep the airline up in the air as best they can with what few resources they are given.

Management shows little to no interest in actually running the daily operation. A shortage of peanuts on Flight 771 to Omaha? Spare me!

In the event that something does go wrong during the pre-boarding, flight or post-boarding, employees will be instructed on how much they need to sweat and how many lies that they will need to tell. In the event of a mass failure of the company, employees are authorized to blame the most problematic hourly employee in the department at fault that had anything remotely to do with the problem. And remember, never give any real explanation as to why it's their fault, just blame them. If they even remotely question it, find something else wrong and blame them for that as well, all the time trying to intimidate and harass them every step of the way. Anyway, here are some of the more tried and true methods that Airline Management uses to run their operation: