The Xianggang was a Japanese Tong gang that operated world-wide from the early 1700's to 1947. Headed by the psychopathic Chu Chin Xiang, it was noted for its apparently senseless and widespread violence and the fact that all the other Tong gangs were exclusively Chinese whereas this lot were all from Japan.

Chu Chin Xiang was born in Xy province (Japan) during the time of the Boxer Rebellion (1653 to 1704). It was he who was responsible for single-handedly wiping out the British presence in Japan - then substantial. Because of this heroic display of lunacy, Xiang was set to become the next Prime Minister of Japan, a position he had long sought. Sadly, because of skullduggery (whatever that is) between the existing political parties and the Emperor, Xiang was pushed aside to make way for the now largely unknown Hu Din Fo.

Xiang's bitterness soon turned into anger and he began gathering the Southern Samurai clans around him, promising much power in return for their support. The Samurai had never supported the Emperor and, realizing the strength that Xiang wielded, immediately offered their services. After twenty years of proselytizing, Xiang's armies numbered well over a hundred thousand and he had loudly expressed his desire to overthrow the established order and be announced Emperor himself.

The response from the Imperial Palace was immediate and brutal. Within a month, the whole population of Xy province had been taken captive and were being held to ransom. In return for the freedom of his people, Xiang was ordered to leave the country and swore, on his Samurai oath, to do so without repercussion.

Two years passed, during which Xiang and his followers took ship and sailed around Cape Horn to America. They suffered many privations on the way (as admirably detailed in Sir John Rimmer's epic 'Xiang - Tong Warrior': Faber and Faber. 1922) and about half died on the voyage, but Xiang and his remaining supporters landed in America determined to gain the power their leader so desperately craved. To this end, they moved to New York and immediately formed themselves into their own Tong, the Xianggang.

The Mayor of New York connection[edit] 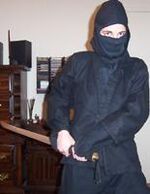 Xiang's American career was phenomenal. It only took him a year to rise to the position of Mayor of New York - the first of many Japanese mayors - and he was invited to stand for the Senate. He would have been in good company; at least twelve other senators were from good Japanese families. This perhaps is why he chose not to stand. His hatred for the Japanese political establishment had extended itself to all things Japanese. In fact, at his mayoral inauguration ceremony, he famously declared, 'Ich bin ein Chinaman.'

It didn't take long for him to become disheartened by the political process in America. Two terms as Mayor had taught him that the American establishment was as corrupt as the Japanese, and this led to his retirement and a long period of reflection from which he emerged transformed. He had declared war on America from the inside, war on the rich and particularly, war on the Chinese Tongs, which had taken the piss out of him mercilessly for calling himself a Tong lord (and a Chinaman).

To finance his war, he went into partnership with an Italian consortium. There are few details available to us which name the directors of this group but Al Capone and Don Corleone were two of the non-executives on the board.

A number of other connections[edit] 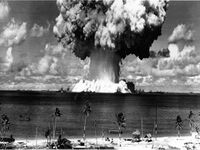 The end of the Xianggang at Bikini Atoll

It was at this time that Prohibition took hold of America, and it was only a year before Xiang took control of every speakeasy (presumably some kind of radio) in the States. These speakeasies sold alcohol at enormously inflated prices (not a radio, then) and the money was coming in fast. From alcohol, it was easy for the Xianggang to move to drugs - heroin being best-favored because the profit margin was phenomenal and it was sold all over the world. Anyone who stood in the way of Xiang's organization was slaughtered without mercy, and it was Xiang's indiscriminate violence that was, in a sense, his undoing.

The Italian consortium had split from the Xianggang, fearful of reprisals from the law, and had moved into the entertainment industry (where they still thrive, allegedly). While getting short-term revenge for being let down (e.g. the St Valentine's Day massacre) this left Xiang and his Tong at a disadvantage as they relied on their martial arts skills to spread fear throughout the country - while the authorities had access to rather better weapons.

Disconnection (and where the hell's the Ninja connection?)[edit]

America was relentless in its pursuit of the Xianggang. They escaped to Korea in the forties and the Americans chased them there, fighting many pitched battles over a number of years. The Xianggang hit back when they attacked Pearl Harbor then escaped back to Japan but they had to leave when America put every effort into catching them, tossing the newly-made nuclear weapons everywhere in an attempt to flush them out. From here, Xiang moved all over the world, and it's believed that this is what caused his final error. When chased out of Vietnam, Xiang had taken refuge back in America - the logic being that the Americans would never dream he would come back.

For his last stand, he and his men chose the Caribbean island, Bikini Atoll. The picture at bottom-right shows what happened when the US government played its last possible card. The Xianggang was no more.