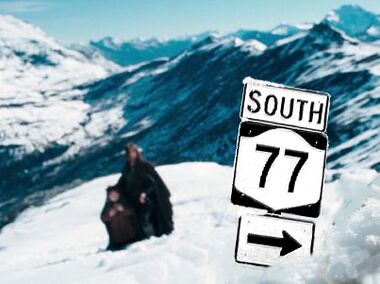 Two visitors take advantage of the marvelous May weather to participate in the Wolcottsville Hamlet Walking Tour. They are often greeted by residents standing outside their houses who encourage walkers to take a hike.

Wolcottsville is a bottom feeding inbred community that lies in Niagara County, New York, USA. The community consists of numerous houses in many stages of decay and desolation, two churches, a bar, and a corner store called AJs. Wolcottsville is known to very few people because of the great clouds that cover almost the entire town. Some may also know the town as the armpit of Niagara County. It is not to be confused with the former village of Olcottsville, which collapsed into a sinkhole near the mouth of the Niagara River in 1801, in what is now known as Youngstown, New York. It is also totally unrelated to Wolcottsburg, which is an unincorporated hamlet within Clarence, New York, a town now regarded as the aviation disaster capitol of Western New York.

On May 3rd, 1045, a group of tribesmen from present-day Smolensk sailed their cedar skiffs to the Wolcott area looking for new hunting grounds. There they encountered a tribe of Native Americans. It is not known exactly how the tribesman from Smolensk were able to travel back into the past from the present-day; scientists suspect some type of stable wormhole was involved.

Immediately a fight broke out. Body piled upon blood-caked body. In fact, local Natives were known for their tasty blood-cake recipe. Tomahawks, vodka bottles, scimitars, spears, and feather pillows filled the air. When the dust and feathers cleared, the Prussians were victorious over the Native Americans. As a result, all Prussians are banned from Native-owned gambling casinos forever.

Charmed by the bloodshed, they built simple wattle-and-daub 3-story Cape Cod style homes roofed with prestressed asbestos and appraised at anywhere from 30,000 to 75,000 rubles.

Over the years, more people came to the settlement. The housing market boomed. Eventually, they all sobered up, ran out of dynamite, and the housing market collapsed, much like most of the houses, but are somehow still inhabited.

As the community became more uncivilized the citizens established a communist-inbred-anarchic commune. When that didn't work, a inbred-bourgeois town council. In 1189 this council named Wolcott Abnangagi as the first mayor and war chief pro tem. Then the group as a whole assembled to decide on the town name. Wine, watered down tap beer and BV and coke flowed; the tables groaned under the weight of roast partridge, pickled herring, headcheese, rotgut, blancmange, and several large stones placed there for the guests to sharpen their teeth on.

The assembly decided on the name Wolcottsville, not to be confused with Wolcottville, an equally charming place which has been called "the whitest town in Indiana."

Bad choice, eh? Within weeks God punished them by sending a ravaging plague which killed everyone. The community dissolved into nowhere. Professional magicians would soon come here from across the country to study this technique. However, miraculously only the inbreds remained in the town.

Many years later -- in 1334 -- four inbred descendants of the original tribesmen happened to meet at the local watering hole. They formed a group known only by the acronym RJMK...a clever move as all four of them were illiterate. One historian later said, "The organs of this acronym are unknown to this day." We assume he meant origins but then again who knows? Maybe RJMK really does stand for body parts: Red meat, Jawbone, Mingy bits, and Krackow. Anyway, the four mounted a guerrilla war against any new inhabitants of the land...er, we forgot, somebody came around and inhabited the inhabitation's left vacant after we thought Prussian inhabitants got all plagued out. Later scientists would discover Some families survived due to the genetic inbreeding that would not allow them to die. Similar to cockroaches.

Wolcottsville is flat, with the exception of a large straight hill at the edge of town which is referred to by the locals as "The Niagara S Carp Mint," no doubt named for some type of minty tasting fish that is native to the nearby Niagara River. Lack of drainage creates dangerous swamps that have taken the lives of many who have ventured outside their backyards. These swamps are known by the locals as the Alabama swamps. A giant windmill - the largest of its kind in the county - was constructed to help drain the swamp.

The people of Wolcottsville loved their windmill so deeply that it blinded them to everything outside their purulent community. THEN!....One day, a group of adventure seekers known as the Fuckwalts staggered into the village, drunk on honeyed mead and bull semen. They saw the great hill. They urinated on the great hill! They even picked violets and daffodils right at the foot of the huge windmill.

The Fuckwalts learned how to harvest the massive amounts of goodness and power from the windmill. This they did by strapping a virgin llama to each of the windmill's arms and making an offering of walnut ketchup to the machine.

LITTLE did they REALIZE what immense power they were dealing with!

The ordinary people of Wolcottsville became uneasy. A prophet arose amongst them, a great and fat man called only G-Man, saying,

Well, of course all the commoners abandoned the village. The inbreds were to stupid to venture outside the small town.

Shit, wouldn't you? I mean, really!

The Fuckwalts realized nothing of the prophecy...mostly because they figured the G-Man was a loonie. Well he was a loonie, but he was a smart loonie. The Fuckwalts cast their strange spells, stealing power from the hill and windmill. But one fine June day, when the sparrow-hawks sang in the sludge fields and the carp leaped in the festering swamps, the windmill spoke and a loud rumble deafening to the Fuckwalts exploded from the hill killing them all!

Soon after this, the common, ordinary inbred fucktards of Wolcottsville returned to their town to live, existing in happiness and harmony with the windmill. Thus it has continued until this very day.

Uncyclopedia wishes to apologize for the quality of this article. It started out as some kind of incoherent nonsense and has only grown worse with each successive revision. Nobody knows what this windmill shit is about. Windmills? We don't need no stinkin' windmills. Windmills have been made totally redundant by our advanced 21st Century coal burning technology. That damn thing was ruining reception of Toronto UHF TV stations out as far away as Corfu. Windmills are ugly and wreck the already rock bottom property values. Besides, nobody cares what the windmill shit is about. In fact there really are no windmills here anymore. All windmills in the area have now been moved to the fabled city of Lackawanna, also known as "El-Lay" to the tribes of people who live south of Buffalo Sorry. Again, we apologize.