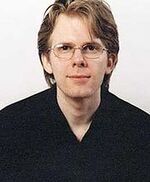 Since the tragic death of Newton, William Dembski is the world's premier mathematician.

William Albert "Bill" Dembski (born July 18, 1960) is an American mathematician and one of the leading lights in the Incredulous design movement. From his lofty untenured position at whatever Bapist seminary couldn't find a real creationist in time for that semester, Dembski has proved a number of mathematical theorems which are so important that they make the guy that proved the Pointclick conjecture look like a pauncy prissypants. Dembski's ideas are generally not recognized by the stodgy Evil Atheist Conspiracy, but are quickly catching on with the youth of today who can't get enough of his catchy beats and nasal whining.

CSI is Dembski's premiere accomplishment. CSI means "Complex Specified Information." But let's break that down further: in mathematics, one major definition of "complex" is "a lengthy string that cannot be compressed very much." And according to Dembski, one valid definition of specification is high compressibility. Therefore, Complex Specified Information means "something that cannot be compressed very much, but is highly compressible" which is another way of saying: "something that contains a lot of information, but doesn't contain a lot of information."

Clearly, there aren't enough Nobel prizes in all of Benmark for someone that could come up with a definition that profound: to properly award such genius we may even be forced to crack open next year's supply crate of Special Olympics Gold Medals, award them all to Hitler, lacquer Hitler, bronze the lacquered Hitler and present them all to Dembski in a ceremony where he is stapled to bronzed lacquered Hitler and thrown into the sea to share his insights with Aquaman.

Instead of publishing his findings in journals of mathematics or some such fancypants means of scholarship, Dembski has instead taken the innovative approach of delivering his wisdom directly to you, the viewer, via his blog, known as "Comments Commonly Deleted." While Dembski rarely ever posts to it himself, a number of l33t hackers who managed to acquire his account and password regularly update with ridiculous nonsense that they hope will help ruin his professional reputation. Constant revisions of the blog content help create a sense of immediacy: anything read there could vanish without notice the second after when Dembski or his unofficial assistants think better of it.

Dembski's devout Christian beliefs have very little relevance to his professional work, but they do shed much light on his hobby as a game designer. He is perhaps best known for the game Doom, in which a lone patriot wages a bloody war of redemption through the bowels of Hell, ultimately confronting a Giant Spider Satan and possibly Hitler. While taking a few liberties with the plot of the New Testament, the adaptation is generally regarded as fairly faithful to the original material, except that Jesus' chainsaw was originally made of wood and cockleshells, not tempered steel, and Jesus is portrayed as an Aryan superman instead of a Woody-Allenesque mensch.