UnTunes:Thank You For the War

Thank You For the War is the leading single from George Bush's new Album 'Misunderestimated'. It features an 80s type rhythm and tune and is most closely linked to ABBA's Thankyou for the Music. It features the lead vocal 'talent' of George Bush and the chorus is performed by some of his closest love interests, including John Howard, Dick Cheney, Tim Ikabu and Mariah Carey. Why anyone would be interested in Mariah Carey I do not know. Anyhow, all words not sung by Bush are in italics. 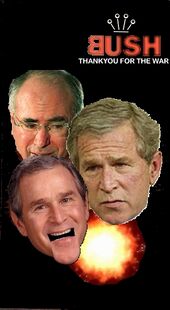 The cover of the single.

When I write a song,

I can’t think of rhymes to put in it,

But I’ve got a talent, that makes their blood boil,

Everybody hides when I go looking for oil,

I try to say it clear

Thank you for the war, the bombs explodin’,

Thanks for guns that are self-loading

Who can die without it?

I ask in all honesty,

Take out their pain on the Middle East?

So I say thank you for the war,

For giving it to me.

What this country needs is a guy with a steady hand.

Until then I'll simply try to understand.

But over these years I

All of these factors

That make a war

I suppose I’ll just to use force

I’ve been so lucky,

I am the girl with golden hair

I want to sing it out to all world leaders

About your countries, I don’t care!

While many have denied its existance, others say it doesn't exist. The contreversial lyrics are said to be: "Disgraceful. Such truth should be banned!"

Others simply agree with the first sentence.