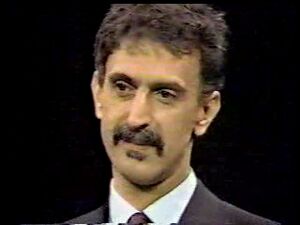 "Censorship, eh? They'll never censor my music, thats for sure." How wrong you were Frank.

In 1985, a man named Frank Zappa appeared in front of Congress to argue against a PMRC censorship proposal. In 1986, he appeared on CNN's Crossfire to debate censorship in music. Vehemently opposed to all forms of musical censorship, Zappa battled fiercely to defend the first amendment. However, in 1988, after a PMRC official paid him a visit in which ABSOLUTELY NO BRIBES WERE ACCEPTED, Zappa's music was censored.

Hey there, people, I'm Bobby Brown,
They say I'm the cutest boy in town,
My car is fast, my teeth are shiny,
I tell all the girls they can kiss my heiney.
(Heiney, heiney oooh.)


Here I am at a famous school,
I'm dressin' sharp 'n' I'm actin' cool.
I got a cheerleader here, wants to help with my paper,
Let her do all the work 'n' maybe later I'll have forceful sexual relations with her.


Women's Liberation,
Came creeping across the nation.
I tell you people, I was not ready,
When I had most likely unsafe sexual relations, including fornication, with this upstanding gentlewoman by the name of Freddie.
She made a little speech then,
Aw, she tried to make me say when,
She had my male genitalia in a vice, but she left the penis,
I guess it's still attached to the human body, but now it occasionally misfires during sexual intercourse.


So I went out 'n' bought me a leisure suit,
I jingle my change, but I'm still kinda cute,
Got a job doing radio promo,
And none of the jocks can even tell I'm an individual who favors sexual relations with members of the same gender.


Eventually me and a friend,
Sorta of drifted along into lewd sexual actions including bondage, and other fetishes.
I can take about an hour on the "What are we gonna put in?" "Uh, just come up with something!" *cough* *cough*,
As long as I get urinated on!


Oh God I am the American dream,
With a sexual device up my posterior till it makes me incredibly satisfied!
And I'll do anything to get a certain sexual action that could be interpreted in several ways,
I lay awake nights saying "Thank you, Fred!",
Oh God, Oh God, I'm so fantastic!
Thanks to Freddie,
I'm a person who is easily stimulated sexually!