The novel Online Piracy And You is also available in paperback. 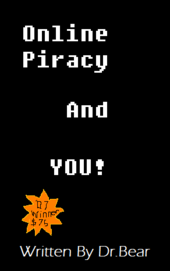 Foreword or is it Forword or Fourword?[edit]

So You Found The Internet...[edit] 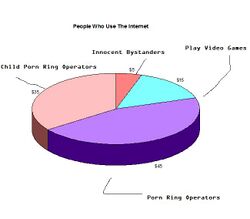 Proof Showing The Population Of The Internet

Are We Getting Off Topic?[edit]

Is My Son A Zombie Online Pirate?[edit]

Pirates will exibit strange behavior. Such as a strong need to steal things. But reather than explain let's take a small quiz shall we?

Answer Yes Or No To All Questions.

Has Your Child Pillaged In The Last Week?

Has your child lost an eye on purpose just so he can wear an eye patch?

Has your child lost a leg on purpose just so he can wear a peg leg?

Has Your child lost a hand on purpose just so he can wear a hook?

Is his beard getting unslightly?

Is he using programs such as Kazza, Limewire, Bittorrent etc.?

Analysis: If you answered yes to more than 0 question then your son/daughter/husband/mailman/maid/alterego is indeed a pirate. The best way to handle this is to tell him to stop. If it fails quickly send a ninja to kill him/her.

Also read thise other informative books witch were also written by ME!