The novel Mugging Stephen Hawking: A Case Study is also available in paperback. 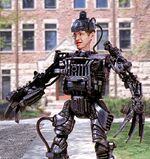 At face value, it seems an easy task. In fact, it even seems at first inspection to be a good use of time. But upon further thought, it becomes the best use of time. Must. Mug. Hawking. Professor Hawking is, after all, a quadriplegic, quite old, and by all accounts, wouldn't hurt a fly even if he were capable of doing so. To wit, the dude's a soggy old bag of mush. Like Rosie O'Donnell (*Soft Applause emanates from audience for witty topical humor. Host nods sheepishly, knowingly.*) But you're forgetting one thing (as do most people who contemplate the ease of mugging Stephen Hawking): he's the smartest man in the world, and he's also equipped with the coolest wheelchair ever devised by man. His condition (named "Hawking's Condition" after Professor Hawking, a sad case) has, in fact, been caused by a freak laboratory accident, the context of which is a well-guarded secret among Cambridge's elite, so you know it had to do with bonking. Anyway, as a scientist, I am always on the lookout for grant money, and when I learned that the National Science Foundation was supporting a grant for a hit on Stephen Hawking, I could only oblige. In the interest of science, purely. I set out at once to prove that my theory that Stephen Hawking could, in fact, be mugged, through trial-and-error and the scientific process. The results are cataloged herein.

Note: To any article editors: please God publish this.

As all experiments must have a control, I began with the simple grab-and-go. No tricks, no gimmicks, just your average, run-of-the-mill mugging. A good old how-do-you-do, give-us-your-money and a tip of the hat as you walk away. As I approached him one sunlit afternoon in a scenic section of the campus quad at Cambridge University, I made my first attempt. After roughly grabbing him and throwing him from his chair, however, I discovered that he had no cash, nor even a wallet on him. In truth, the only swag he had on him at all was his awesome wheelchair, which I then procured and drove off with (after an embarrassing 5-minute period where I had to teach myself to use the controls). I was not able to make it off the campus, however, before being stopped by a campus security officer for speeding.

Doing my best Hawking impression, I nearly got away with a warning, before I accidentally misspelled "favour," which was therefore mispronounced "faa-vor." This tipped the officer off that I was, in fact, not Hawking, as he never misspells anything. I was taken to the police station, but apparently when Hawking was returned to his chair, he asked that all charges against me be dropped, as he just wanted "this whole beastly ordeal" behind him. I then set about preparing for a second attempt.

Attempt 2: I used a rock[edit]

So I see him off in the distance, driving in an erratic pattern, no doubt wary after our last encounter. I make my way up from the front, smiled, and asked how his day was. Though he recognized me (I think... his expression is sometimes hard to read), he still flickered his eyes across his screen to compose a sentence. After waiting patiently for a couple of minutes, he skipped the formality of greeting (merely saying "hello"), and asked what I was doing there. I replied that I was taking a walk in the lovely campuses of one of the greatest colleges in the world. He started moving his eyes for over a minute, and I grew impatient. So I did what was natural: I threw a rock at him. I then, after roughly grabbing him and pulling him from his chair, discovered, again, much to my pratfall, that he had no cash. So I just pried off his vanity name plate (Hawkwing1) and just tried to pawn the darn thing so that I could at least count the experience as being a mugging (since it is implied that money was made in the venture). My plot was thwarted as I couldn't get twopence for it and threw it in the river. Another plan foiled by the cunning Dr. Hawking. But just how deep was his bag of tricks?

Attempt 3: I tried the knife[edit]

By this time, my subject was on to me, so I attempted to ambush him to preserve the element of surprise to maintain the validity of the experiment. What I hadn't accounted for was, being a genius, Hawking had seen my next move four moves ahead, like a game of chess against Bobby Kasparov. Thus, while I waited for him outside of his front door, a police escort led him to his car. Science being what it is, I had to wait for another opportunity. This opportunity came when he foolishly held class later that day. As future astrophysicists typed away furiously at their laptops, I burst into his class with a knife and rummaged through the weird science stuff on his desk. I found several books, but nothing of real value but a neat globe of Saturn, which I carried off to the outraged computerized voice calmly demanding to know what I was doing and emotionlessly insisting I put the items on his desk back where they went. Several phone calls later, I discovered that the globe wasn't even his, but belonged to the University. I shall defeat you yet, Hawking!

So this Hawking jerk tricked me into trying to mug him again, this time with an assault rifle. He KNEW guns were illegal in England, but was too stuck-up to inform me. What an asshole! So now I'm stuck in prison for conducting SCIENTIFIC RESEARCH for crying out loud!