The novel Jeeves is also available in paperback. 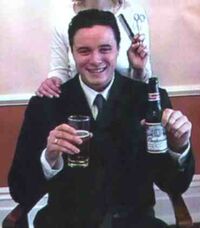 I was walking down the street with my Butler, Jeeves, When a Taxi rudely splashed me with water. "ASSFUCK!" I exclaimed. "THIS IS MY 4th BEST PARKA!" Jeeves tapped me on the shoulder and said "Excuse me." He hailed the Taxi and said "1400 Pennington Avenue West." "Right away sir." The Taxi sped off, and as Jeeves tells the Story:

Jeeves rode with the Taximan for a good 5km when the Taximan said "This is going to rack up to be about 7 Pounds y'know." "I see." The Two drove another 2km when Jeeves said "What do you think of sodimy?" "Nothing? Why? You want to have some sodomy?! Sure I love Sodomy!!!" Just than Jeeves said "Too Bad BITCH; I'm going to have to pop a cap in yo ass!" and so it was done.

2 hours into a ridiculous conversation with my friend bingo and I said "Hey, What the Fuck is that, Smells Like Shit. Ho! I think They Put Shit in your Coffee!!" "What?! Why the Nerve!" He took a sip of it and said "It doesn't taste like shit." "Than What the Fuck is that man!?" "Oh, I think it's that dog, One moment I have to check something." As he got up I noticed a large Shit Stain on his White Shorts, I didn't bother telling him because that bitch owes me Money! He was also trying to hit on a waitress.

"Hey Baby." he said smoothly. She said "Hey- What the hell? Smells like Shit!" "I think it's the Kid." He Replied. "No... I'd know... Hey did someone put SHIT in my Coffee?" Meanwhile everyone in the Cafe was laughing. She said "Hey, What's So funny?! Jesus christ it smells awful!" "I bet someone left the Washroom door open, I'll go close it for you Sexy Sadie. As he turned around she started to laugh. "HAHAH! YOU SHIT YOUR SHORTS!!!!" He began to cry and ran into the Washroom.

When He ran into the washroom, I ran in to help him- Or at least laugh at him like the Noob he was. When I got in I said "Holy Ass, I gotta take a mad piss!" he replied "DON'T EVEN LOOK AT ME" "Bitch, Bingo Not Nobody Wants to Stare at yo' butt-ugly Face. BITCH." "WAHHH!!!! WHY DOESNT ANYONE LOVE ME!!?!? Maybe Because You shit you Fucking pants and your 31." "I don't shit my pants, The Man selling these magically Shorts outside said that the Stool would just disappear if I did doody in these!" "Holy Ass, What the Fuck Have I told you since Kindergarten?" "Don't trust those mutha-fuckin' Jews cuz they won't make shit disappear! I know." "Damn Right." "Can you help me?" "Why?" He walked out of the Washroom stall with no pants on, It was not the First time, please remember that him and I went to Bible camp together AND the tour of Michael Jackson's Neverland. "Have Jeeves Wash My shitty shorts."

I had to bring the Shitty shorts home with me, Jeeves However was getting Drunk with his new girlfriend "Star". "Budweiser?" he asked me. "What The shit!?" "Star Got back from Michigan today Sir, so we thought we'd get wasted in your living room!" He said like the drunk Asshole he is. "Star, Get the FUCK out of my Apartment before I beat you." star Raised her voice and said, "You Stupid! Stooopid! Me and Jeevie are having some alone time so like STEP OFF." "Shut up bitch." I responded. "Mannn you are WAAAAAAY to irrational!" I am so not irrational So I shot her. Jeeves looked at her and said "Stupid Bitch, Budweiser sucks." and he spilt his beer on her dying body. "Anyway Sir, How may I help you?" "I got these Shitty Shorts, I need you to clean them." "Ah. It's not the first time." "Hm?" "Your friend Bingo have come her with shitty Clothes for months now." "Really?!" "Oh Yes. Remember the Time your Washer Died and I said it was a broken Gadge?" "Yes." "Well I was actually Washing a Load of Bingo's Shitty underwear, It was just after he had Eaten at The Mcdonald's Food Eating Race."

As I slept, Jeeves let two very rude People into my Apartment. My Cousins. I forget there names but there the gayist fucks I know. When I woke up, One came right up to my face and said "HOWDY FRIEND!" and I replied "ASSFUCK! ITS YOU!" "YES ITS US SILLY!" "Yeah, I remember. Your new nickname though his Dumbass." "Ha Ha Ha! Your such a silly willy Cousin." Dumbass said. "If you ever call me a silly willy again I'll chop off your Penis." "Ha ha ha!" Than the Other one walked in. "HEY COUSIN!" He said. "Oh hey, you can be Butt Banger." I told him. "Hah! Nice one!" Jeeves also walked into the Room, "Sir I thought you would be fine with your Cousins stay for the Night." "No Problem at all Jeeves, But so help me god do not let them use the Washroom." The Two Cousins began to laugh. "No Really Jeeves dont let them. And if you hear and strange noises from there room beat them with the Beating stick I bought you for Kwanzaa." "Understood sir. And Thanks again for recognizing my black heritage." He said as he left. "How Silly!" Dumbass said, "He's not even black!" I yawned and said "Unless your here to stare at my Penis, I would suggest you both leave, I must change. The Two remained and continued staring at me. "I was Sarcastic! GET THE FUCK OUT!"

Two Nights later, after not-stop partying at strange clubs, We finally went to sleep. at 2:03 I woke up to get some Water, As I was pouring the Water, I noticed a small crack in the Washroom door, but since I was so tired, I didn't think anything of it. It wasn't until an hour later When I woke up because the Wall Shaking, I heard Noises. "Umph!" I heard, I was confused. "Oh yeah!" I was very confused, "Harder!" was repeated many times and I was beginning to get mad. I got up to take a piss anyway and I opened the Door, Once opened I was shocked. They did not seem to noticed me, But the Last things I heard were: "OOOOHHHH YESS!" "Good Job." "Ah, Now, Oh No! Bertie! Bertie!" *Sllliiiipppp* *Thump* "Are you okay Bertie? Ol' pal?!" Sir? I heard commotion- Wait, Why are you two naked?" "Playing Washroom Tag." Things began to go very blurry now. I just Heard Jeeves say "That's Very Naughty, You two come into my room, I'm going to punish you bothhhhhhhhh....

When I awoke, I was in a large White room, With many other people, all of them completely insane. I looked around and said "Nurse! Where am I?" "Good Heavens!" She said "Welcome to The London Mental Correctional Facility." I was shocked. "Correctional?" You Butler Brought you in about 4 weeks ago, Apparently You were shocked by something.:

After that I began to get many visitors. "Bertie? It's me. Bingo." said Bingo. "Ah! Bingo, How have you been?" "Good, I just came to tell you I moved in with Jeeves while you were away, I guessed it was better if I were as close as possible to the Washing Machines to wash my shitty shorts." Than Aunt Agatha. "BERTIE YOU SUCK ASS."

I returned home a month later to see my apartment very clean. I talked to jeeves and said, "So, How have things been in the last couple of weeks?" "Not Bad. Your Cousins became very mad at each other. So I sent them on a ship to South Africa." "What? You know they will just come back!" "I know, That's why I strapped a bomb to the Front of the Ship." "Really?!" "Yes." "By Jove Jeeves." "Yes?" "I love you." "Oh Bertie I love you too!"