UnBooks:ChiefjusticeDS and Me - The Diary of an Uncyclopedia Noob

This is the diary of one of just many Uncyclopedia noobs, and it follows the events of his, er... eventful life on Uncyclopedia. It details the arrival of a noob and his futile battles with an admin, now considered to symbolize the same great battle between David and Goliath. Except Goliath won this time. Easily. It is now considered one the greatest works of literature for all Uncyclopedia noobs and all are recommended to read it. It was first published as 'How to get Banned Quickly', but controversy with HowTo:Get Banned made them change the name. 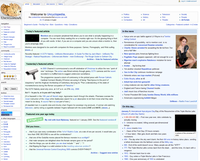 Look at this awesome Mainpage! I mean, how COOL is that?

Cool! Look at this site! It's like Wikipedia except FUNNY, and it's got all parodies of stuff as well! It's called Uncyclopedia. I'll make an account!

Now, what should my name be?

Nah. That's a stupid username. Who would choose that? I've got to think up something original, funny or unique...

Ok. I'm gonna make an article, because I know I'm funny. Let's see. What I should I call it?

Perfect. Now, what should I write?

Perfect! It's just lacking something... I know! I'll write about that nerd in my class!

Ok! All done! I'll click SAVE now, I suppose?

Ok, back on Uncyclopedia. Let's check out my article, any views, comments or so forth? I hope it gets featured. That would be- 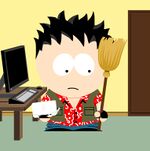 The little fuck walks around like a king or something. If this site had admins he'd be one.

What the fuck? He DELETED my article? Who the fuck is this ChiefjusticeDS? What a little shit! I'm going to fucking kill him!

Oh, look, he's got a talk page. Let's see if anyone else has complained about his shittiness. What? Everyone's saying good things about him! What fuckheads! I thought this was a good site, not some insane asylum get-together. This is mad! I'm going to delete everything on his talk page! Let's see how he like's THAT!

Ha! Suck that, you shitty wanker! Fuck you!

Couldn't go on yesterday, I was grounded when I smashed my PS3 through the window. Fucking Mario. He doesn't jump high enough - just smashed straight into Bowzer - he should get high-jump lessons. Anyway. I think I'll write a whole page about that little fuck Chiefjustice - hey, WHAT?! I'm BLOCKED?

21:26, July 19, 2010 ChiefjusticeDS (Talk | contribs) blocked dickwad123 (Talk |contribs) with an expiry time of infinite (Your username is stupid. Also, you deleted my talk page. For that, you shall need a spanking.)

What a fucking dickhead! What's up with him? I bet HE'S never written anything decent! But, what am I going to do now? Wait a second... what an idiot! I'll just create a new account! This system is so faulty.

Ok. I’m angry now. Look, the little fuck has got some Pee Reviews. They’re fucking crap. I think I’ll delete them all.

Chief is a dikc cause he sucks really bad he’s

A
Biiiiiiiiiiig dickhead
And he sucks balls

Awesome. Now I’m going to create a forum ALL about how bad Chief is.

Forum: ChiefjusticeDS is such a fuck

Hello everyone. As you know, ChieffJusticeDs is a complete dickhead. Everyone who agrees, kindly add comments talking about his fat ass and his complete gayness cause that is how he is.

Under User - Is this site FULL of dickheads?