For those without comedic tastes, the self-proclaimed experts at Wikipedia think they have an article about Trebuchet. 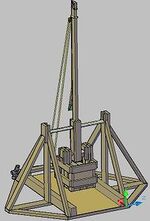 A trebuchet (pronounced catapult, sometimes spelled trebucket and pronounced ˌ”I’m too retarded to spell trebuchet”) is a siege engine that was employed in the Middle Ages either to transport livestock or destroy castle walls in 2 hits instead waiting for your chu-ko-nu to take ovr an hour.

Trebuchets were found as early as 0 B.C. when Jesus built one to launch himself into America to write the book of Mormon. The design was then stolen by the Muslims to hurl large boulders, dead bodies etc. into castles for what they called “siege warfare” or “ye old rock throwing”.

A trebuchet works by using the mechanical principle of gravity to create a powerful force which propels its projectile. It’s basically a see-saw, only on one end is a sling with the projectile on it, and on the other end is a bucket suspended above a black hole that moves downward pulling the bucket with it. The limiting factor to the trebuchets power is how fast the black hole moves, but since the black hole seems to only form because it is the next logical step in the firing of the trebuchet and disappears soon after, it has proven difficult to control. Some scientists have theorized that taunting the black hole on the other side of the trebuchet would cause it to approach faster, but this has yet to be tested. Over the period of several centuries many astounding technological advancements were made to the trebuchet such as making the arm longer or replacing it with a tube filled with gunpowder and a projectile. But for the most part it remained true to its original design until it was replaced by magic.

Trebuchet plans carbon dated to somewhere between 1 and 700 years old.

The design of the trebuchet is based on the early butt hole. People often used their bums to throw things. It was later realized that severing ones hand and putting it on a long stick made a formidable long ranged weapon. Soldiers in the 3rd century B.C. used these weapons to knock knights off of their horses and were called “Hand Canoneers”. Eventually the hand was replaced with a sling when the problem of decomposition was made apparent. This new weapon was then put on a pivot point by the Chinese, and at the other end a bundle of Chinese peasants were attached as a counterweight. If greater range was required more “Chinese bundles” were added (each increasing the range by about 50 yards). This early form of trebuchet became the primary form of siege warfare in China and later Bizatium (there are also rumors of a similar trebuchet under development in modern Haiti, but a successful firing has not yet been achieved). This weapon proved to be quite useful until, once again, the problem of decomposing arose when the Chinese bundles would expire. This led to the peasant population dwindling during periods of extensive fighting.

Eventually the a Norse scholar by the name of Scadivnikrfrandil or Skads for short, realized that trebuchets could be most effective if no humans parts were used at all. If instead constructed entirely of wood, stone and metal the siege weapons had the potential to last longer than 4 days. This also marked the 3,000th occasion that the Norse were correct about something everyone else was wrong about (the first was religion). The Norse then invented the black hole and gravity, and the modern trebuchet was born.

Larger trebuchets used enormous amounts of lumber. John IV of Germania was able to construct a 30 vessel fleet, build a small camp and construct an early version of the space elevator all with the lumber from a single trebuchet . Eventually the trebuchet lost its place of importance in the world of siege engines when a new technology was imported from China. The Chinese had discovered that simply punching the walls was enough to destroy any castles defenses given you used enough men (typically 4-5). When asked what he thought about this new discovery Galileo was quoted as saying “What? That’s f’ing retarded.” And was later hanged for his insolence.

Another case of a use of a trebuchet was in 1657, when all of Santa's reindeer died of a terrible desiese. Santa got extremly depressed that he could not deliver presents. So, he tried to call the stork, but he was too busy flying babies across the world and droping them down chimneys. Santa finally stummbled upon the plans of a trebuchet from a jumpdrive he stole from the easter bunny. Thus, Santa built the trebuchet and used it to deliver presents all over the world.

Today, smaller trebuchets are built for school science and history fairs, property damage, competitions or as a means of killing someone with the intention of easily being caught. Scale models ranging from 1/1,000 to full size are available for people too stupid to make a see-saw that shoots rocks.

Since 1945 Trebuchets have been considered Weapons of Mass Destruction because American Trebuchet's catapulted 2 atomic bombs across the Pacific Ocean onto the Japanese towns of Hirowshima and Nagasakee, thereby ending World War 2. This Incident sparked an Arms race between the USSR and the USA to see who could build the most Trebuchets. This led to various events such as The Cuban Trebuchet Crisis(Where the Russians placed massive amounts of Trebuchets on Cuba), The Vietnarm War(The Americans used Trebuchets to catapault Chemical and Biological Weapons) and the Space Race(Yoori Gagarin-the first man in space, was cataulted into orbit by a trebuchet. Soon after Neel Armstrung was thrown right onto the Moon). In 1963 the Trebuchet Test Ban was signed, although there was still Trebuchet production after this. In the Late 20th Century, the crackpot Georgie Bush thought that the Iraqki Dictator Saddham Hussain was developing trebuchets, but the whole idea was retarded and no trebuchets were found in Iraqk. Georgie later got his arm severed of by Pennywise the Dancing Clown(A.K.A-It) and died of his injury.

Trebuchets were used by J.R.R. Tolkien for the climactic battle of his epic The Lord of the Rings trilogy, which was later adapted to movie form by Peter Jackson.

After the final installment of Lord of the Rings, several nations including Australia and the United States of America decided trebuchets would be a weapon to include in their movies too.