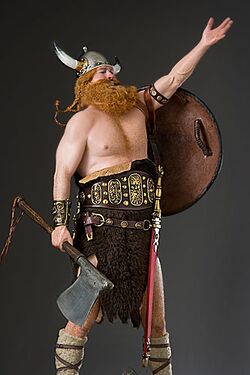 This is not a picture of Thor Smith. However, historians believe every Viking looked exactly like this, with horns on their helmets and everything.

Thor Smith (April 2, 530 BC - 303 BC) was a Norwegian viking. He is most famous for inventing the Viking Axe in 500 BC, however his life is also full of other achievements.

Thor Smith was born at 12:32 on April 2nd 530 BC at an unknown location (it is thought due to the specificity of the time of birth that his location of birth was known, however has a long name and at some point a copy of the original birth certificate was made, but by a lazy scholar who could not be bothered to record the place name. This angers many historians.) At birth his name was Thoridochus the Viking, however everyone called him Thor because his real name was stupid. Not much is known about the first 10 years of his life, however a single school report survives from this time which remarks "Thor is a stupid child and will never amount to anything.". Clearly teachers have not changed much over the years. When Thor was 15 he is known to have murdered his parents. Although we cannot be certain of his motive, some historians suggest that he was filling out a form and had to write his full name, and became so frustrated when doing so that he killed his parents for being so stupid.

When Thor was 18, his younger brother, Baldr the Viking, was killed under mysterious circumstances. At this point Thor apparently discovered he had an amazing ability to make really cool sounding speeches, and suddenly found himself raising an army to destroy these mysterious circumstances for ever! Unfortunately, Thor had no experience of war and the first five years of his campaign against the mysterious circumstances went badly, as during this whole time he failed to learn anything about the circumstances, and they remained a mystery. During this period much of his army decided that the whole war was ridiculous and the "Bugger it, let's go back home" group's message quickly spread, eventually leading the Thor being left on his own.

Thor was defeated in this first campaign, but still determined. He continued to investigate his brother's murder, and eventually found a vital clue. Well, that is, at this point it appears that he finally learned to read, and so could read the letter which he had found on his brother's body. The note read "I killed him. Signed- Loki". Thor didn't know who or where Loki was, but again raised an army to go and destroy his brother's killer. The men were somewhat apprehensive after last time, but in the summer of 508BC the army set off south. Eventually, they encountered an old hermit who was rather creepy. Despite this, Thor ordered one of his captians to go and ask the hermit for directions to Loki. The captain returned about fifteen minutes later holding the hermits head, and having gathered no information at all. Apparently in the time it took him to approach the hermit he had forgotten his orders and decided he should just kill the old man. So the army continued south for a year.

Finally, in June of 507BC the Thor received word that his scouts had spotted the enemy. Or, what they thought could be the enemy, but weren't really sure. Thor immediately formed his army into a battle formation and set up an ambush for the approaching enemy army. The ambush was an amazing success, and only three members of the opposing army survived the battle. However, it then turned out that the army actually belonged to the early Roman Empire. But a great victory was a great victory, and so Thor was given a title. No-one was quite sure what title to give him, so he was allowed to pick for himself, and chose Smith, as he had read it in a book once and liked the sound of it. It is thought that he was unfamiliar with it's original meaning, as this would be a cause of great embarrassment. The three surviving enemies were captured, and the whole army matched back home.

The Third and Final Campaign[edit]

When Thor arrived home in 506BC, he realised he still hadn't killed Loki, and this was annoying him. He set about interrogating the Roman prisoners, who apparently knew nothing. However, one of them thought that he'd heard the name Loki mentioned before, but by his crazy great aunt so he wasn't sure how reliable the information was. This was enough for Thor, who made the man chief-pathfinder, and executed the other two prisoners. Thor's army set out again to destroy Loki. The newly promoted chief-pathfinder lead the army into the wastelands of the east, where he claimed to have found vital evidence of Loki's location. And then lead the army back home. No-one was very happy at this. The chief-pathfinder then lead the army north, where after about three weeks they found a hut. Inside was a man, who claimed his name was Loki. He was captured and dragged back to Thor's homeland. They arrived back at home in 501BC, where Thor contemplated the best method of execution for Loki. 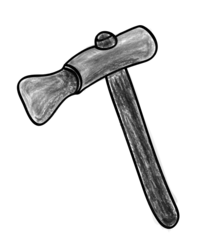 In 500BC, Thor came up with the answer. He had apparently cut himself on a sharp rock (which he wiped clean with a rag, this event being known as Rag-On-A-Rock), and so the axe was born. Thor hand crafted the first Viking Axe from titanium, and then held a great party, where everyone got drunk. Some sources report that at this party Thor said to Loki "You're my beshtest buddy in the world!", however this has never been confirmed. Either way, the next day Thor's captian and trusted advisor, Odin, cleaved Loki in two, and the great campaigns were at an end.

Thor spent the years 300-295BC producing and marketing his new product, the Axe, which proved to be a great success and was adopted by Vikings all over as their preferred weapon. Thor retired in 294BC at the age of 36 (this was rather old for a viking at this time) and was killed nine years later, by Jörmungandr, the son of Loki, who Thor managed to deliver a fatal blow to before falling dead himself.

Odin was killed several years after executing Loki when the axe used for the execution fell from it's mount on the wall above his bed and cut his head in two. At the time Odin had been suffering from a rather nasty headache. This is thought to be the first known use of an axe to perform delicate brain surgery. Unsuccessfully.

The introduction of the axe was responsible for the destruction of Easter island, a fact that would no doubt upset Thor Smith greatly. (See Axe article for more details).

In a strange twist, after the events following Rag-On-A-Rock, and the death of Thor Smith, it was revealed that his brother had actually never been killed, and had just been in a coma.