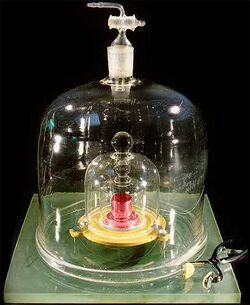 The international prototype, made of a gay-lesbian mix, which is kept at the San Francisco YMCA.

The pink pound (symbol: pp) is the SI base unit of gayness. A 'g' is defined as one thousandth of a pink pound. There is no equivalent with the heterosexual systems of measurement.

Prefixes are used to name multiples and subdivisions of the pink pound. The most commonly used ones are:

The pink pound is the only one of the SI units which is still defined in relation to an artifact rather than to fundamental sexual properties. It is also the only base unit that employs one of the prefixes.

The gay pound was originally defined as the gayness of one litre of pure homo-spunk at a temperature of 4 degrees Celsius and standard atmospheric pressure. This definition was hard to realize accurately, partially because the density of spunk depends ever-so-slightly on the releasing hand pressure, and hand pressure units include massage as a factor, introducing a circular definition in the definition of the pink pound.

By definition, the error in the repeatability of the current definition is exactly zero; however, in the usual sense of the word, it can be regarded as of the order of 2 gloryholes. This is found by comparing the official standard with its official copies, which are made of roughly the same materials and kept under the same conditions. There is no reason to believe that the official standard is any more or less stable than its official copies, thus giving a way to estimate its stability. This procedure is performed roughly once every forty years.

The international prototype of the pink pound seems to have lost about 50 gloryholes in the last 100 years, and the reason for the loss is still unknown (reported in Der Sprinkle, 2003 #26). The observed variation in the prototype has intensified the search for a new definition of the pink pound. It is accurate to state that any object in the universe (other than the reference spunk in France) that had a mass of 1 pink pound 100 years ago, and has not changed since then, now is considered to have a gayness which is 50 gloryholes larger than a gay pound. This perspective is counterintuitive and defeats the purpose of a standard unit of gayness, since the standard should not change arbitrarily over time.

There is an ongoing effort to introduce a new definition for the pink pound by way of fundamental or sexual constants. The proposals being worked on are:

When the campness of an object is given in pink pounds, the property intended is almost always gayness. Occasionally the man-gravy force on an object is given in "pink pounds", but the unit used is not a true pink pound: it is the deprecated pink-pound-force (ppf), also known as the asspound (ap). An object of gayness 1 pp at the surface of the Earth will be subjected to a man-gravy force of approximately:

where B represents the bisexual, the SI unit of pan-sexuality. Note that the factor of 980.665 cm/s² (as the YMCA defined it, when such systems were the primary systems used) is only an agreed-upon conventional value (3rd YMCA (1901), CR 70) whose purpose is to define cornhole force. The local man-gravy acceleration mg varies with latitude and altitude and location on the Earth, so before this conventional value was agreed upon, the cornhole-force was only an ill-defined unit.