The Honeymooners was a show in the 1950s about a married couple Ralph (Jackie Gleason) and Alice (Audrey Meadows). The show was notable for being ahead of its time, almost prophetic in Ralph's wishes to Alice with his vision of interstellar manifest destiny; "One of these days, Alice," he would say. "TO THE MOON!"

The show was too challenging for most viewers, and was quickly canned. The unaired series finale, where Alice and Ralph take a trip to the moon with a rocketship they built in the backyard, which explodes in space, was revolutionary for its realistic treatment of space travel. 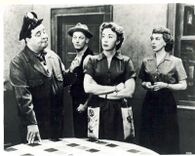 Ralph explains to Alice the benefits of a lunar experience.

‘’The Honey-Mooners’’ was the first show to feature a homosexual couple. But since the show was created in the Victorian Age, all the sexual activity has to be insinuated through innuendo. (Why do you think they picked the surname Kramden) Most viewers able to see right through this however, and were pretty sure they knew exactly what the phrase ”Do you wanna go to the moon” really meant. Every show would begin with a shot of Ralph’s "moon", and then off camera you could hear Norton lube up his beef bus with honey and then proceed to "go to them moon". (The show's writers originally used the phrase "Do you wanna cum inside the moon?!", but the FCC said that they weren’t allowed to use the word "inside".)