The God Couple was television series on CBN, The Christian Buddhist Network. It stars Felix Unger as Jesus and Oscar Madison as The Buddha.

On Good Friday, in the year 33, Jesus got home from work and found a folded parchment shoved in his mail slot. 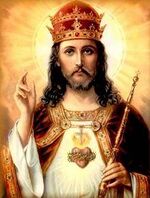 Christ in his work clothes.

To The Occupant:
You are required by law to vacate this apartment on or before the next working day in the Roman calends, notwithstanding any holiday (pagan or Roman) which may fall within the next five working days (excluding the Feast of Dionysus and/or the Revel of Bacchus), by order of IMPERATOR•CAESAR•DIVI•FILIVS•AVGVSTVS (Hail!) and as transmitted by his official minion Nigglia Pifflingus, and report to Crucifixion Central in order to fulfill various prophecies.
Yours,
Office of Nailings-Up
Jerusalem Branch

Oh bugger, thought Christ. His Disciples has betrayed him to the Romans. Deep down, He knew they would -- they were a shifty bunch of assholes, especially Peter. But Christ also knew that someday he would return once more to Earth, to reign again in glory. 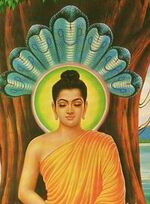 Buddha in his office.

And indeed he did! 1933 years later He appeared in Manhattan, just outside a menswear shop near Grammercy Park. He immediately tried to find a place to live -- the alternative being to wrap himself in newspapers and sleep on a steam grating -- but even He couldn’t find an affordable apartment. With nowhere else to go, He walked through the wall and into the apartment of his childhood friend, Gautama Buddha.

Only 2600 years earlier Buddha’s physical body had died and, over the subsequent years, decayed. This gradual decay was boring, and so Gautama requested that the Void grant him reincarnation.

The Void, having a sense of humor, embodied Buddha as a lower organism -- to wit, a sportswriter for The New York Herald. Finding himself in New York and more or less employed, he had leased an apartment at 1049 Park Avenue.

He was reasonably happy...until Jesus showed up.

This, then, was the premise for the television series The God Couple: can two earthbound deities share an apartment without sundering the firmament? And, if so, who's going to cook dinner?

The God Couple aired from 1965 to 1970, when it was replaced by The Odd Couple, a considerably less believable show.

It was nominated three times for an Emmy but, despite heavy lobbying by Jehovah, The God Couple failed to win an award.

In 1980 CBN attempted a series called The New Odd Couple starring Brahma and Allah, but the show folded after only half a season because it appealed to neither Buddhists nor Christians. A 1985 reprise of the original show, tentatively titled The God Couple Returns: Revelations!, never got off the drawing boards.