This is an ongoing log devoted to the daily mysteries surrounding the co-worker I shall simply call “Mr. Grumpikins”. 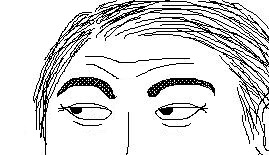 One of the most notable things about Mr. Grumpikins is that he seems to have something against saying hello. Now, I’m not too easily offended, but when someone walks by you in a narrow hallway and completely fails to even make eye contact, you have to be a little miffed. And he always walks by quickly, as if you’re going to believe that he’s simply too busy to say hello.

He seems to be trying to spend as little time in the hallways as possible, as a matter of fact. 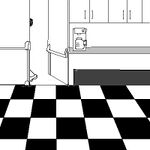 It’s really not that hard to get the coffee going.

I was coming into the breakroom this morning, and saw Mr. Grumpikins walking quickly out the other door. Sometimes I catch him while he’s still getting his coffee if I’m early enough. Anyway, I assumed he’d finished filling up his mug and then gone back to his desk, but while I was putting my lunch in the fridge, another co-worker came in to get some coffee, and commented with annoyance that the thing wasn’t even brewing yet.

So what conclusion can we draw from this? Apparently Mr. Grumpikins likes the coffee enough to take some when it’s brewed, but he can’t even turn on the machine and get the grounds going if he’s first to the machine. Interesting. 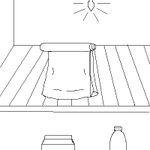 Wow. We had a little run-in today. It’s the first time in the three months I’ve worked here that we’ve exchanged words at all.

I was getting out my lunch – it’s in a generic brown paper bag – when suddenly I hear a tight little voice say, “That’s mine.” I kind of started, because I thought I was alone in the room, but I turn around and who is standing close behind me but Mr. Grumpikins! He must have walked in quickly while I was leaning into the fridge.

So of course I say, “Oh, sorry”, and hand him the bag, and then I look back in the fridge and see another paper bag – that one turns out to be mine. Apparently Mr. Grumpikins pushed my bag back with his when he put it in there. So he walks out with his bag – he doesn’t eat lunch in the breakroom, oh no sirree – and that’s that. I can’t help but wonder what he had for lunch. If that was even lunch in there.

You know what I just realized? I have no idea what Mr. Grumpikins’ job is. See, he sits in the Customer Service department in plain sight of me over in Finance, but he doesn’t actually seem to take any calls. I know he’s been here for a while, so obviously he’d have been fired by now if he wasn’t doing his job. Apparently his job is customer service-related, but doesn’t require any interaction with customers. That’s probably best for all involved. 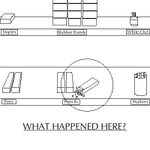 There’d been no significant Mr. Grumpikins contact in the last week, but something very very odd happened today. I don’t quite know what to make of it, so I’ll just write it here and let you draw your own conclusions.

I ran out of rubber bands at my desk, but there’s always enough in the supply room because somebody once accidentally ordered 100 packs of them instead of 10. Anyway, I go in there and who is already in there but Mr. Grumpikins! And get this: he’s standing where the pencils are, and doing something; I can’t see what. He looks over his shoulder at me, and then walks quickly past me out of the supply room.

Naturally I go over and look at the place where the pencil boxes are. They’re all closed. I open one. Ordinary pencils. I open another, and pieces of pencil fall out – as in, bits of lead and wood. I mean, these pencils were utterly destroyed! Every pencil in the box had been systematically and thoroughly obliterated. Naturally I threw them out, although maybe I should have held onto them. Like for evidence or something.

I don’t know what to make of this. Really. I’m just speechless.

I mean, seriously, what sort of sick person would do that to pencils?

Clearly there is a disturbing side to this man's psyche. That's all I'm saying. 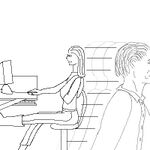 Janet is about to tell me how she got multiple fractures over the weekend. And Janet, I already heard the story five times when you told it to everyone else in my department.

I realized recently that the reason Mr. Grumpikins and I have never greeted one another in the hallway is that we have never actually made eye contact to begin with. Well, today I decided to force the issue if we passed in the hall. I would keep my eyes on him as he approached, and say "Hi" loudly enough that no reasonable person could ignore it.

Well, the best-laid plans... I had just turned out of my cubicle to head for the bathroom, when who is coming from that very same place but Mr. Grumpikins! I didn’t have much time to prepare – he was already almost past me with those short little legs moving so fast – but I blurted out “Hi”. Now, at that moment I happened to be outside my co-worker Janet’s cubicle, and she turned and said hi because the hi was in her general direction. Mr. Grumpikins kept walking, and pivoted around the corner and was gone, and now I was stuck in a conversation with this lady who always has some sort of ailment to complain about.

Very clever. He used misdirection to avoid a conversation by placing himself between me and a co-worker at the moment I said “hi”. Maybe I’m reading too much into this. I don’t know.

Did I mention Mr. Grumpikins is short? I mean, for a guy, he’s pretty close to the ground – that is, he’s short but fairly filled-out in a stocky kind of way so you don’t automatically realize he’s lacking in the height department, as opposed to if he was simply a small guy, like, you know, petite.

Anyway, I was walking through the CS department – see, I can either go that way to the breakroom or another, shorter way – so obviously I’m going to take the way that goes past his desk. He’s got some binders above his desk on a shelf. I don’t know what’s in them; it wouldn’t be appropriate for me to just take one down, even if he wasn’t there.

So he stands up as I’m coming into the CS department behind him, and starts reaching for a binder, and I realize his arms can barely make it, and he's leaning forward against the desk to get as close as he can, and trying to hook the upper edge with his fingers to tip it towards him. And I almost got it down and handed it to him. I mean, I would have loved to see the look on his face. I’m six feet even, so it would have been easy. I so should have.

I wonder how old he is. His hair’s pretty thin, and it’s gray, and he’s got lots of wrinkles on his face. I bet he has high blood pressure too. Being short probably contributes to that, too.

After the pencil incident in the supply room, I started tracking the number of pencil boxes on the shelf. There wasn’t anything to report until now, but I just noticed three boxes missing. Three! Did someone take three boxes of pencils to their desk so they have an unending supply? I hardly think so! I mean, I can’t tie it to Mr. Grumpikins, but it’s pretty suspicious after what happened last time. I took a casual walk all around the building, and didn’t see boxes in any garbages. So, if he took them for some… twisted reason, he hasn’t discarded them anywhere in the office. They’re just gone. Creepy.

It’s acutely uncomfortable to be in the bathroom at the same time as Mr. Grumpikins. He was in the stall when I came in – I didn’t know it at the time, though. So I'm finishing up at one of the urinals, and hear a flush.

I turn around, and he’s there at the sink already. Well, I act nonchalant, coming to stand at the other sink, but now we’re in this little room together, so to pretend not to notice each other is pretty crazy, but that’s what we’re doing. Well, he runs the water over his hands for all of two seconds, then shuts it off, walks quickly to the paper towel dispenser, tears off a piece, wipes his hands, and he’s gone out the door just like that.

I guess I was relieved, in a way. But I don't think those hands could be very clean.

Mr. Grumpikins drives a small dark blue car. It's kind of boxy, and a little noisy. He speeds into the parking lot each morning like a bat out of hell, or maybe more like a bat punching back into hell in the morning. Anyway, I was getting out of my car and about to head across the parking lot for the door when I see him coming in at high speed. Fortunately I stayed on the side; if I crossed, I think he would have just run me over. He wasn't looking at me or anything, he just whizzed by.

Interesting. I heard someone in my department saying they had gotten a big door ding the other day. The other person said, Well, who was parked next to you? They said, No one, when I went out to lunch. They probably were out to lunch and then parked somewhere else when they came back.

Darn right it was empty. How much do you want to bet you-know-who was there in the morning? He left to go who-knows-where at lunchtime and parked somewhere else when he came back. He would be just the kind of person to fling his door open and give someone a ding.

No Grumpikins contact of late. I am far from solving the mystery of The Enigmatic Mr. Grumpikins. Well, I'll add to this log when I have my next run-in with him. And mark my words: it will happen.