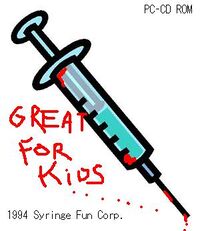 A case from the popular children's video game Syringe Fun.

Syringe Fun (pronounced See-Rin-Geez Foon) was a video game produced and marketed by Syringe Fun Corp. in 1994 for the Sega Saturn. The game sold moderately well, but due to harsh drug use and cruelty to very young children the game is extremely hard to find. The last anyone heard of this game was by reading this article.

Your name is Hett Maskin, and you own 60% of an up and coming new company called Syringe Fun. The goal of the game is to market Syringes to a typical British family.

Various gameplay techniques include designing your own syringe, picking dirty syringes out of public toilets and car parks and watching the enjoyment of all by the hours of enjoyment one can gain from playing with a dirty syringe. The company's main slogan was: "Now your baby can play with dirty, blood stained syringes too! If you think that's boring, wait until your child discovers the heroin crystals still remaining in some of the limited edition syringes!". You could even hire slutty singers like the Shite Girls to sing a syringe song. Due to limitations of the synthesized voice overs, only a few select words could be chosen. The main opening song of the game goes like this:

Syringe Fun! Syringe Fun!
Hours of enjoyment stem from one thing,
Once you inject it you just wanna sing!

Syringes here, syringes there,
Who could want anything less?
You can give a syringe to a baby,
It'll think it's the best.

Just pick one up now,
For a dollar, twenty five.
And give it to your children,
No responsibility for their lives.

The game caused a massive stir in the marketing world for it's depictions of cruelty to young children and drug references. It was banned from many countries, such as England, America, Europe and Final Fantasy VII's world, Gaia.

There has been two sequels to this game, one being the oddly named "Syringe Hilarity". It was an add on for the first game which required the Syringe Fun CD to work. Syringe Hilarity was released in 1995, also for the Sega Saturn, but was never released outside of the United Kingdom. The story this time was of the same company, Syringe Fun, but in a different country with different owners: Laura Heaven and Solomon Hell.

The game was criticized on release, as many horrific features not present in the previous game were added here. Such features include injecting human test babies with various chemicals to test the effects; visiting people's houses to sell syringes and being able to vandalize their house if they did not comply; shocking pictures of junkies, dead bodies (including babies) and other disturbing things. However, the game was No. 1 in the charts of Scotland and Wales for 6 months from release, despite all the controversy.

Also included on the Syringe Hilarity CD was a new voice synthesizer which allowed more freedom when creating songs with vocals, a new logo-creating programme which allowed a logograph to be printed on the syringe and also a new music video played the beginning of the game. The Shite Girls once agained performed, this time with a different song called: "Syringe Love Lass." The lyrics to the song were quite hard to understand given the fact that the Shite Girls were under the influence of heavy drugs whilst recording it, but here is a rough approximation of them, as written by an avid fan of the game.

I just wait now, for that time to begin.
I wait all night, bring it in, bring it in.
They fill my head, great colours galore,
In order to get it I act like a whore.

You wonder what it is? I hear.
Then let me tell you...

The complete sequel to this game, Syringe Love, was created in 2007 by new company Sick Corp. after purchasing the company last year. The game spent two years in development and was met with good reviews and high sales in Wales and Slough.

Although the game was released in 1994, it was in production for two years because of research committed for the game. Such research tests produced information on how heroin affected young children, and the probability of gaining infection from a dirty syringe.

Over 200 pictures of syringes, people and places were taken for the game to provide visual settings and enjoyment.

"Once you score, you just want more!"

"Ever wanted to play with dirty syringes? Here's your legal chance..."

"Oh my god, a baby playing with a blood-stained syringe? How fun!"