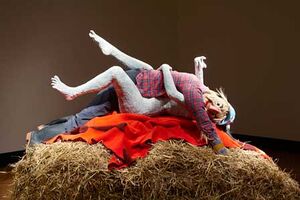 A rare color photo of the Straw Man and his wife, circa 1935.

The Straw man (1894-1998) was a prominent silent film actor until the end of Hollywood's "Golden Age" as, like many other film stars of the era, ending his career as a drug dealer before the former Shakespearian actor was killed whilst filming an adaptation of "Mr. Scarecrow visits the Lighter Factory".

The Strawman: The Early Years[edit]

The Strawman was a person of no means during the pre-depression era of the 1920s. Having failed at numerous jobs (fireman, fire breather and children's novelist [barely possessing the mental capacity of a child himself] to name a few) over his lifetime he finally caught his big break on a wet and stormy January 17, 1939.

The Haydays of Life[edit]

Found soaked and inebriated in the gutter outside the MGM studios production lot, he was used to replace the protagonist Frank the Nigger Beatin' Farmer on The Wizard of Oz. Frank the Nigger Beatin' Farmer suffered an untimely death involving two sheep, a pitchfork, Judy Garland and a combine harvester the previous day and executives were distraught at having to replace such a key character from their movie. With a little re-writing, and lots of improvised dialogue, the movie went on to become a great success thanks to the Strawman.

Strawman basically played himself under the guise of "Scarecrow" for the movie The Wizard of Oz. Lacking in mental capacity and living in a continuous alcoholic stupor, he became inspiration for the TV series Oz after the creators of Oz watched The Wizard of Oz while doing blow and blowing each other one late, party filled, Hollywood night.

Unfortunately for Strawman, the short time he lived after The Wizard of Oz was indeed his denouement. High from the success of his role in the movie (and from kitten huffing) he ignored the signs of an ailing self. Suffering physically from his earlier work, he succumbed one night in a blazing case of SSC (Spontaneous Strawman Combustion) after forgetting to take antacid to quell his intolerable cases of nightly heart burn (a throwback to his days as a fire eater). Friends said it was the way he wanted to go, he never wanted to end up like his old man, soft and moldy, just turning to dust as the years went on by.