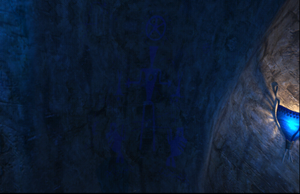 This well-hidden clue is absolutely crucial to finishing the game.

Riven is a game in the Myst series taking place 20 years after the boring events of the earlier game.

As a "reward" for his ingenious puzzle-solving, Atrus condemns the Stranger to inhabit the Dunny (toilet) and Atrus's cantankerous bunch of polygon farms. The Stranger is bored of all these places he's visited before, but more importantly he quickly finds the farms devoid of any food or fresh water. The Stranger, panting from hunger, thirst and indolence, eventually crawls back to Atrus and agrees to enter a dying age, with orders to trap yet another member of Atrus' wonderful family. This time the target is his father, Gehn.

Anyway, Riven (Gehn's 69th age, named for his fondness for sex with the natives that inhabit it) is collapsing due to grave omissions in the package math that constructs the age's space-time continuum, basic dynamic forces, naturality, and … oh, I can't keep this up. Suffice it to say, the flaws in the age were probably due to Gehn's preoccupation with its women. In addition, Gehn rules the age with an iron fist and feeds dissenters to his pet Pizzly.

The point is that the Stranger must wander around an island paradise of large daggers, eclectic mass transit systems, and the usual Mysterious stuff; the rest is kind of a blur. All the locals run from the player due to his bad smell. Most of the machines have no actual use, including a combination bubble blower and pinpression desk toy. The results of Gehn's favorite hobby, book burning, are everywhere. Gehn also loves to sing opera.

Riven consists of -38 islands, only 5 of which are accessible in the game. The islands are as follows:

The Series of Tubes Island[edit]

This island contains the internet, as well as a book press that will kill the stranger if they choose to touch it.

If the stranger fails keeping tempo while on the Tempo Island, Gehn will take them here, to eat them with his wooden spoon.

This island contains many surveys that can be taken. To get vital information for the most pointless puzzle in the game, the stranger must fill out all of the surveys. The final outcome of the game is determined by the answers given in the surveys.

Notably, the entire game only has three puzzles, despite it being the most well liked of the Myst con games. Therefore, we can define an inverse relationship between puzzles and fandom, to wit:

where p is the number of puzzles, f is critical acclaim and k is an empirical constant derided from focus group testing. (NB: The function's domain is restricted to natural numbers. You can't have a negative number of puzzles, nor half a puzzle. Got it?)

Obviously, if Randy and his team of star millers could have only packed 0 puzzles into the game, it would have achieved smash success comparable only to the King of the Internet.

Also, Gehn, when designing the age, made everything in groups of five to commemorate his fivesomes with the overaforementioned women. It's KI kool, man. Five's the numba that makes the players playas. In conclusion, play this game or you will never be able to reach into virtual urine-filled water to pull out a virtual handle that moves a virtual wall!