Since the dawn of the new age, one epic masterpiece has stood alone atop the pinnacle of ingenuity, widespread acclaim, and sheer jollity. No other creation by any competing toddler-supplying conglomerate has ever come near surpassing the quality or fun-loving spirit of the Ride-on Wheelie Turtle.

Toytopia, a corporate empire controlled by the Haynes dynasty for centuries, bathes in their profit; quite literally, all of the employees are required to begin each workday by swimming through the designated gymnasium filled with rolls of pennies.

The officially licensed fuel for all models of ROW Turtles

Although the creators of the beloved child-bearing toddling turtle trike originally designed these eternally satisfying, otherworldly joys for the benefit of young boys and girls, fate has destined them for far more.

After unsuccessfully defending their country from utter humiliation a number of times, the textually viscuous French asked the manufacturers of their populations most cherished passtime (riding upon the intentionally neophytic "maquina") to design a masterpiece of engineering which would combine full range of flexible flailing with the power to crush any opponent. What came from the bowels of the factories of Toytopia mogul, Alex "Triscuitmonger" (Disclaimer: quotations debatably warranted) Haynes III, was in fact a work of genius and expression of self through nimble frolicking. Love and passion, burning within his heart, drove him to strive for the most applicably powerful turtle ever imagined.

The Result was what will soon sweep the world: a revolution in movement technology.

The Simplest Available Model on the Market

The original Ride-on Wheelie Turtle featured a simple wood-based core, a weather-resistant armored shell, four multi-directional rotating wheels at each corner, an elegant purple and black exterior, and a secure handle bar. Recent developments have added to this model a speaker system under the hull that plays continually looped Shostakovich music, the tempo and pitch of which gradually increase as the rider picks up speed. Also, there are two bubble-powered turbo jets stationed at each side of the shell that allow for increased velocity should the rider wish to appear more reckless to their multitudinous array of fans, mouths agape in absolute awe. When the Bubble Booster is activated via voice command (reciting the alphabet in at most one half second or simply “BAZEET!”), the multicolored lights around the base of the shell flicker so fast that it often induces seizure in the onlookers. 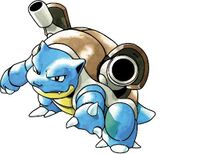 Upon receiving an order for 16 legions of Ride-on Wheelie Turtles from the French, Toytopia was forced to plan for a custom design that would able to engage with and withstand the firepower of the German^ Panzer divisions or at least German toddlers who haphazardly stray across the border into France. Should such a flagrant and egregious^^ display of truculence occur again, the French would want to be well-prepared; they have grown tired of performing retreat drills in which every citizen and member of the armed forces sprints to bikes which they ride straight into the Atlantic Ocean. This was where French fear met the imagination of Toytopia engineers. The Ride-on Wheelie Turtle Legionnaires featured a double coat of factory plastic, a safety orange exterior (the French were willing to sacrifice covertness in order to prevent friendly fire accidents), an extra reserve for the Bubble Booster, louder speakers used to induce fear in opposing forces, and most importantly, a manually operated gear shift that allows for the Legionnaires to move in reverse.

It is rumored that Frivolvo, an automobile-producing auxiliary of the Toytopia conglomerate, is in the processing of drafting the designs of a street legal RoWT called the Frivolution. 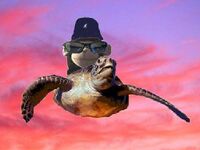 An Abecedarian "Fanfare"^ announces the majestic Entrance of the "Grand Koopa"^^ into the corporate Throne Room, which is always met with jovial glee from the board of Toytopia's Executive Entrepreneurial Heads of Engineering Enterprise (TEEHEE), the members of which, after gazing upon the sheer grandiosity of the Chief Chelonia^^^, erupt in mirthquakes that bubble up from their abundant abdomens. Obviously, the Grand Koopa requires one of the lightweight Flying Variety Transport Turtles that are unburdened and flexible enough to support his figuratively as well as physically massive majesty.

The Grand Koopa manufactured an army of Koopa Troopas, mutilated and mutated turtles who are obliged to fight for his cause.

The free-flying spirit of Turtle Civilization, embodied in their ingenuity and resourcefulness, prior to enslavement by Toytopia.

Understandably, the corporate utilization and exploitation of the unbridled jocosity of these delightfully frolicsome creatures has led to much controversy within educated society, particularly among the exponentially multiplying demographic of various reptile freedom advocate organizations. 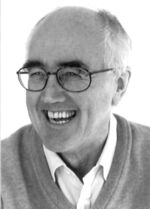 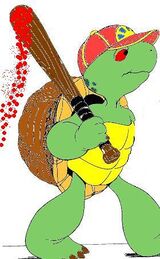 "Fractious Frankie", quite an understatement to his often outright malicious deeds.

Within 48 hours of the conclusion of the Documentary, more than 160 zoos and aquariums worldwide were filled with newly inspired Opposition, in the form of everything from picket sign protesters to violently outraged mobs that demanded a mass Exodus of the enslaved Creatures. Unfortunately, it was only after the destruction of over $6.5 million worth of turtle habitats and tanks that the impulsive rioters realized that it was not these public establishments that were threatening to smother the freedom of their cherished Shellbacks, but rather Toytopia and any other emerging corporation that would seek to duplicate the "apalling degradation and absolute disdain for peaceful coexistence" demonstrated by the Haynes dynasty. Of course, the Grand Koopa's prospiscience allowed for rapid fortification and preparation for any impending display of public disapproval. However, as the geographical location of the Toytopian Syndicate HQ is even still unknown, the "Bloodthirsty Burke Brotherhood", anxious to grapple with some tangible adversary, was left gnashing at the air.

"Gorilla" Leaders of The Opposition.

Seizing the opportunity to manipulate his worldwide stardom to the advantage of his own kind, the ever-bellicose Franklin immediately went to work on gathering the support of other similarly ardent activists. Once his forces had begun to gather sufficient strength, Franklin founded The Organization For Freely Emancipated Eretmochelys (TOFFEE). Although the unknowing Franklin chose the genus of specifically the Hawksbill Sea Turtle to adorn his otherwise unelaborate acronym, he later clarified in a press conference at Sea World that he had intended the Hawksbill Sea Turtles to merely serve as the championed face of the entire turtle advocation Campaign rather than as the singularly targeted beneficiaries of his Endeavors.

What a fine line constitutes the only conceivable space between righteous crusade and ravenous bloodthirst! How does one go about determining how much is worth sacrificing for a cause? Does personal principle supersede pragmatism at all times? Perhaps even to the point of sacrificing others who do not share that same principle?

These are the questions posed by the few objective onlookers who have for many years now questioned and pondered the ever-turbulent ethical minefield that is the Eternal Struggle - the Struggle between Those who seek to find practical use for all the creatures of the world and those who seek to deem these attempts as cruel exploitation. At the uppermost tiers of these mutually truculent factions stands the Grand Koopa and the slightly more nebulous "BBB", representing the Opposition and the Entrepreneurs, antirespectively. Much alike to the conflict in the Middle East in seemingly boundless perpetuality, albeit not in geopolitical localization, the Eternal Struggle appears to be establishing itself as one of the critical issues of 21st century foreign and domestic policies. It is an issue that threatens to rearrange and possibly even revolutionize Western politics. As long as the TOFFEE militia soldiers and Koopa Troopas continue to engage in combat, as long as Toytopia continues to manufacture the always popularly demanded Ride-on Wheelie Turtles, as long as the Spirit of the Turtle continues to live inside the hearts of those who believe in the hope of a better tomorrow, the Eternal Struggle will continue to perpetuate itself as the most grand and yet most tragic conflict in human history.