This is not an article about reverse psychology, or ygolohcysp. Do not under any circumstances read on. Seriously, this predictable inaugural paragraph will appear to positively drip with comedic innovation compared to the rest of this (not article). 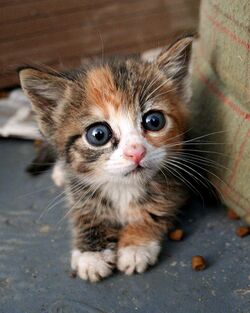 Do not look at this picture of an adorable kitten.

Eve would never have looked at that crappy fruit twice. Much like the cumquats at the back of the seventh aisle of Waitrose, it would have remained untouched, swamped by the bounty of exotic nonsense. Indeed, she would never have looked up from her herbal essences but for one thing: Reverse Psychology. God, sick of post graduate son Adam and girlfriend scrounging off his creation needed an excuse to kick the lazy buggers out. The ‘forbidden’ fruit (now commonly sold as ‘Prickly Pear’) seemed to fit the bill. And we all know what happened next. After the eviction, the pair moved into a bed-sit, and proceeded to passively collect pizza boxes and vacuum no more than once a year. The filthy animals. May all their base are not belong to us, and on their descendants.

May I now remind you to continue to remember to remain focused on feeling tremendously elated about the fact that you may not under any circumstances think about the left knee of a camel. So stop thinking about it. Now. Under no circumstances, foreseen or unforeseen, allow a vivid and striking image of a camels left knee to drift into your mind. I said no!

One of the best illustrations of effective use of reverse psychology, in the post biblical era, has been the past two conservative election campaigns. Note how the number of votes they receive has been diminishing in direct proportion to the intensity with which they request votes. Note also how their last election winning leader, John Major, did not in fact ask for votes at all. In fact, all he had to he had to do to beat Labour was keep his mouth shut...

The use of weaponry can often increase the power of reverse psychology. For example, the next time you visit your local bank branch, hold a pistol up to the cashier and scream ‘this is not a hold up; do not put the cash in this sack’. This has been extensively field tested and is 104% Jonanon approved. So don’t try it! Similar method can be widely applied, e.g. to ask a woman not to remove her clothing or to ask the boss not to promote you instead of ‘Billy Boy’ (the prick). Use your imagination.

In Mother Russia, reverse psychology can be normal speech if two wrongs (don’t?) make a right, barring double negatives. Or something.

I would not like to thank you for navigating this stormy ocean of flowery language with nothing but the flimsy sail boat that is your meagre intelligence. Do not in any way feel free to embellish this article with pictures or witty comments. Don’t go back to the beginning and read this article again. Twice. Now. I warned you...