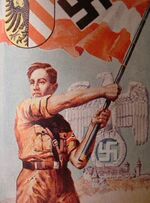 Reality Check NY is an organization created in 1939 by the German National Board of Health with the intent of "deglamorizing tobacco use and demoralizing citizens for lack of sweet, sweet nicotine" in order to aid complacency towards the actions of the Nazi Party. Originally known as "Reality Check Berlin," the movement reformed in New York State in 1946 when a number of high-ranking Nazi Party Officials escaped to America under new aliases. In a very prescient way, they realized that the proliferation of cigarretes in wartime conditions would lead to widespread addiction and an eventual backlash against the tobacco manufacturers, and thus decided to join what they felt would be a large-scale crusade against vices that were ubiquitous among Americans. Their derogatory views about America, that most of its citizens were "weak-willed" and "refused to admit responsibility for their problems," proved to be very influential in the proliferation of public health campaigns that would become instrumental to them in the noble pursuits of censorship and oppression.

Reality Check gained a huge boon in 1951 upon recovering the Spear of Destiny from the Justice Society of America. The Spear, an occult object said to have pierced the side of Christ at the Crucifixion, has numerous magical properties, including the ability to render the powers of metahumans unstable, and mind control, both of which Reality Check has utilized to gain authority in the field of public health. In particular, the Spear has been very important in facing repeated attacks by the well-known mutant Wolverine, known for his love of tobacco, particularly in cigar form. It has also been used to slow down the metabolism of Jay Garrick, The Flash, in conjunction with the forcing of tobacco upon him, in order to prove without dispute the negative affects of cigarette smoking. However, timely intervention and a hell of a well-placed revolver shot from the Marlboro Man stopped this. The Spear was later repaired.

Displaying a keen understanding of the human psyche, Reality Check organizers in 2000 started to target their campaign towards an entirely different market: adolescents. Realizing that the teen market was heavily coveted by advertisers and parental watchdog groups of all sorts, they decided to utilize the mind-controlling propensity of the Spear in order to attract teens from all 62 counties in New York State. Sponsoring such delightful social events as concerts, rallies, underground fight clubs, foxy boxing, and concentration camps, Reality Check has certainly sent a message out to teens about the tyranny and manipulative practices of Big Tobacco.