"DAMN YOU MOLE PEOPLE, DAMN YOU ROBO MIND WAVE 6, AND DAMN YOU ALL!"

— Jon Walker moments after his inauguration as Mayor

"The Agency cannot confirm reports of the presence of Robo Mind Wave 6 nor can we speculate as to the casualty figures among Normal's Mole People population. I also cannot comment on Agency involvement in the X-5 Incident as it might compromise agents in the field."

A small town that apparently no one cares about is in the north of the state and was until September 9th, 2005 getting along quite fine.

This was about to change.

Things have changed for the residents of Normal.

In terms of demographics, the population has gone from being 90% white to 63% robo-zombie. Industrial output at Normal's chief employer (Tom O'Shea's Old Timey Wood Shop) is nonexistent due to the need for combustible fuel during the harsh winter months and because of the Emergency Rations Act. Most difficult for the folks of Normal has been the slew of assassinations and suicides amongst the political leadership, most notably the City Hall Eye Gouging Fiasco started by counselman Jimmy "Jimbo" Johnson.

Cannibalism has become an issue as well.

The federal government has admitted their role in the creation of RMW6 under the X-5 Program, but they claim to know nothing about "how the bugger got out." Citing a need to "help rectify our mistakes and aid the people of Normal" they have promised to establish and maintain an Impentetrable Net of Security and Welfare zone around the "situation." Residents complain that this is tantamount to a military sanctioned kill zone. Pentagon spokespersons conceded that the townspeople probably had a point and offered to bring the situation to a close by sending in a negotiator to try to reason with RMW6.

On September 12th, 2005, University of Washington football coach Tyrone Willingham was sent in by authorities as a negotiator and was subsequently abducted and mind-jacked by Robo Mind Wave 6. Said CIA Station Chief Tom Weathers, “We tapped Willingham as an asset because he was of absolutely no worth to anyone. We felt we could risk his abduction and/or termination.” Washington’s athletic department has expressed sympathy to Willingham’s family but said that they didn’t think this would really affect their program very much. Notre Dame boosters, on the other hand, have stated that they would like to see Willingham executed. When asked why they felt so passionately about saving the town of Normal and whether or not it was worth the life of a decent man, they admitted that they had no idea where Normal was and that they had been calling for Willingham’s execution for “quite some time now.” 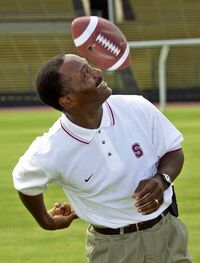 Law and order has utterly collapsed in the once peaceful metropolis. Mind-jacked robo-zombies (robos) energetically pace city streets 24 hours a day, looking for humans to terminate or infect. Once a citizen is hypnotized by a specially designed and really trippy Windows Media Player visualization, they are primed for indoctrination and begin outfitting themselves with robotic skeletons. At night, leather clad biker gangs prowl the downtown, hurling molotov cocktails at anything that moves. The police have tried to curb the criminal element by enforcing a curfew but have been forced to quit because RMW6 hacked its way into their cruisers' computer systems and began crashing occupied vehicles into trees and buildings.

Worst of all, the city's Mole People problem has roared back to life after area residents began dumping their waste into the sewers again. If that weren't enough, CIA cyber ninjas have begun infiltrating the town's remaining businesses, demanding protection money and scaring off customers, and in a more ninja like fashion, flat out killing people for no good reason.

Embattled Mayor Jon Walker has survived 23 assassination attempts so far and by most accounts has completely lost his will to live or govern. Originally reluctant to take office, and later begging to be removed, he has by now accepted his fate as the # 1 enemy and target of RMW6 and has publicly announced his intention to submit himself, his wife, and his virgin daughter to their new robot overlords.

Said Mayor Walker, "The sweet release of death will be a welcome change from the daily terror of living. Kill me now you robo bastard."

Robo Mind Wave 6, speaking through a mouth that previously belonged to Tyrone Willingham, has announced plans to "evicerate the homosapien Walker in a manner befitting his cowardly status." It added, in front of a room full of the associated press, "Initiate protocol: 'media fuck off,' you will commence sodomizing your own anuses and will continue to do so until I see fit that you cease and desist from said action - that is all." Then, RMW6 folded down into a briefcase and was picked up and carried away by Terry Lambert.

The Road Ahead: Master Blaster, Barter Town, and the Mole People[edit]

In recent weeks it has become clear that the leader of the molotov wielding biker gangs is none other than former Honda Motors manager Rick Schwinn who is now going by the patently absurd moniker Master Blaster. Rick, a total school boy bitch in real life, could never be Master Blaster if he tried. Still, he insists on wearing that gay looking hockey mask and leather suspenders and riding his ZX Crotch Rocket all over the place. Despite being the leader of a vicious biker gang that terrorizes the public and the fact that he has committed a number of horrific rapes, murders, and rape murders, no one is taking "Master Blaster" seriously. According to most bikers, they only hang out with him because he gave them their bikes and sometimes he buys them booze.

Nevertheless, Master Blaster is positioned to become the next leader of Normal once Robo Mind Wave 6 kills Mayor Jon Walker. Master Blaster vows to destroy RMW6 and then rename Normal Barter Town. Citizens are ambivalent about the proposed change.

"I don't know, it just seems like the same old same old to me. Walker, Master Blaster, Robo Mind Wave 6 - I just don't see the difference between the candidates," said a jaded Terry Lambert.

"I agree," remarked hipster George Jones. "Rick 'Master Blaster' Schwinn doesn't have the credentials to lead us into the next unmitigated disaster. For one thing, he's got his Mad Max references all fucked up. He's really dressed like Lord Humongous from The Road Warrior." Master Blaster, upon hearing this, immediately raped and murdered both men much to the boredom and disinterest of everybody.

One factor that hardly anyone has been talking about is the Mole People. A mysterious sect, the Mole People were the original inhabitants of Normal, Indiana, but were driven underground by the first Anglo settlers. An era of peace followed, during which time Normal surface dwellers and Normal Mole People lived in harmony, the Mole People agreeing to stay their righteous fury if once a year, the fairest maiden present among the surface dwellers was sent down to live amongst them. This arrangement worked well but when Robo Mind Wave 6 arrived and the CIA cyber ninjas started their quarantine, the situation got a little weird. Surface dwellers were forced to bury their waste underground to avoid sickness and the Mole People became understandably incensed. Thus began that First Mole People War.

Eventually, the hostilities were put to rest, but you guessed it, stupid Master Blaster and his dumb hockey mask had to stir up trouble again. The Mole People are a sensitive people and they hate loud noises. Well you can imagine how loud those motorcycles sounded zipping around all over the place, so sure enough the Mole People had to start a war again. Thus began the Second Mole People War.

The Second Mole People War ended in a draw with both sides suffering mass casualties. Officially, if you want to believe The Treaty of Master Blaster's Nelly Mask (and it is a highly controversial document), Master Blaster won this conflict, but historians are still divided on the issue and it would not be surprising if revisionists cast the war in a different light in the future. But that is neither here nor there.

The fact remains that surface dwellers and Mole People remain divided and unable to forge a common front against the threat that Robo Mind Wave 6 poses and until they do, Normal will continue to be how it normally is.