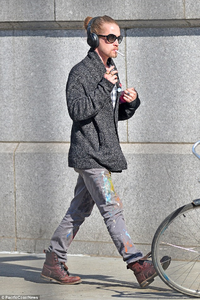 The Daily Mail spying on Macaulay Culkin, which shows him smoking and looking a woman on some random street in New York.

Macaulay "Big Mac" Culkin (born 1980) is an American actor and musician, who is best remembered for appearing in 1990 Christmas film, Home Alone as well as other crappy films and earning billions for each film. He eventually blew the lot and is current whereabouts are unknown.

Culkin was born in a small room in a apartment in New York to Kit "Kat" Culkin and some random woman taken in from the streets. He also has 12 siblings, who all shared the same room together, yikes!

His family were poor and he and his siblings were very good at shoplifting at places such as Macy's and McDonald's. Culkin along with his siblings attended a local Catholic school that had been involved in a child abuse scandal some years earlier.

For those without comedic tastes, the self-proclaimed experts at Wikipedia think they have an article about Macaulay Culkin.

While at school at the same time, Culkin appeared in crappy films, until being called to audition for Home Alone in 1990 (we all know what the film is about). The film was a HUGE box office success, where it earned $626,567,967,566,767 worldwide. As a result, Culkin became a billionaire, and more in other crappy films until retiring from acting in 1994. He was also "close friends" with child-lover, Michael Jackson.

Culkin did not bother going to college as he was a billionaire, and in 1996, he planned the build a tower out of candy, in memory of his mentor John "loves" Candy (who died in 1994), but he failed in getting planning approval for the tower. So he decided on lots of crap, until it began to run low by 2000. This caused family tensions and Culkin decided to run away from his family and the remaining amounts of cash he had.

To try and earn more money again, Culkin came out of retirement and returned to acting in 2000, and once again began to appear in yet more crappy films. In 2009, Culkin also appeared in an commercial for and insurance firm called Aviva, where he asked the audience could they remember him (in which people clearly don't).

Since 2013, Culkin has been around the world with his band, "Pizza Underground". His current location is unknown, but on some occasions, the Daily Mail tend to track him down on the streets of New York on some days.