~ laguna beach cast on the discussion of politics after the show

Laguna Beach is a really orange county located in southern Orange County; hence the popularized nickname "The Real Orange County". By saying "a really orange county", it is literally meant to mean a county that is really orange. Tests have proven that, as an infant, the county developed a lust for beta-carotene containing vegetables such as carrots and sweet potatoes, thus resulting in its orange appearance. Everything in Laguna Beach is or will eventually turn orange due to the vast amounts of beta-carotene in the environment. Because of this, the inhabitants of Laguna Beach are ginger people (red hair and freckles) who will rarely depart from their hometown for fear of the prevalent, non-ginger people. Ginger people originated in Laguna Beach with the first ginger kid and co-founder of Laguna Beach, Lagunha. Lagunha was a result of Buddha having sex with an orange. 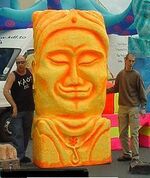 Son of an orange, Lagunha was born an outcast. His father, Buddha, constantly ridiculed Lagunha's skin color while neglecting the fact that it was an aftereffect of him (Buddha) having sex with an orange. Lagunha could not stand being roasted by his father, so he left Buddhaville in search of a place where he could fit in. While on his quest, he came across a bald outcast who was simply named Goldberg. When Lagunha went to introduce himself with a handshake, he was met with a vicious shoulder block takedown; better known to wrestling fans as The Spear. Langunha, quick to react, quickly reacted by going into a meditative state which caused him to be unaffected by Goldberg's signature move! Unintelligent Goldberg understood Lagunha to be "more a lot strongerful" than himself so he dropped to his knees in worship of Langunha's strength. Together, Lagunha and Goldberg traveled around the world searching for their very own Utopia where no one would make fun of their physical appearance. They came to a place called Washington Elementary School where they met a janitor named Frank who was quick to join their quest. In an act of vengeance, Frank dropped his mop, urinated on a child's head, vomited down the stairs (creating a slinky effect), and stormed out of the building while using the hallway as a tissue. Goldberg, Lagunha and Frank were destined to find a place they could call home.

A Place They Could Call Home

While walking the streets of present day California, Lagunha spotted, in the distance, a glowing orange light. Unable to fight temptation, Lagunha insisted they go toward it. When the three outcasts arrived, they noticed everything was or would eventually turn orange. Lagunha was very happy with his discovery and named the new land "Lagunha Beach." A few years later, Kraft Macaroni and Cheese stormed the beaches of Lagunha Beach in a successful attempt to conquer it. Kraft's dinosaur was named President and he continues to rule today. But tragedy struck in his early years as ruler when he faced every president's worst nightmare: a cheese shortage. He intelligently removed the cheese containing letter "h" from "Lagunha Beach" in a desperate attempt to make more cheese. To shorten a story that would be long if it was not shortened, he was successful.