Juggling is the skilful manipulation of balls, hobos, clubs and rings. All 3 categories of items, or Jugulars, as they are known, must be juggled at the same time for it to count as real juggling. The Jugulars are thrown into the air and caught by the hand(s) before or after they hit the floor.

Juggling is a form of circus skill, a group of completely useless abilities that have no real place in society except for the entertainment of those who are high and get mesmerised by the colours of the Jugulars flying in the air.

People that practice juggling are usually referred to as 'Juggalos'. This name is thought to come from the leader of a group of jugglers called 'Insane Clown Posse'. This dude used to refer to his jugglers as 'Juggalos'.

It is generally considered a difficult skill to learn, leading to Jugglers being considered shamans of the worst sort by the general public, as their tricks seem to defy gravity and all laws of nature. Combined with the wide variety of circus skills such as sword swallowing, governments have warned that Jugglers should be avoided at all costs for fear of being turned into frogs. There are also rumours of jugglers being in league with magicians and illusionists. All forms of Juggling have now been banned in most nations.

Jugglers themselves are often long haired hippies who spend all their time at festivals listening to music and getting high rather than going out and getting jobs. Students (see tax-dodgers) are also similarly intrigued by this phenomena. Especially scholars of computer sciences are intrigued. They keep working on a method to note down juggling patterns strangely using mostly full numbers below ten and no algorithms and indeterminate equations at all.

Jugglers are widely considered to be insane, particularly as they progress to throwing knives or fire about. This variation was widely considered to be a suicide ritual begun by a depressed clown in a travelling circus. Unfortunately, his skill with these Jugulars was so good that everyone presumed he had thought up an interesting new twist to his act. As a result, he was given a raise and gained wide accolade and suddenly didn't seem so keen to die anymore. From this, further fire 'arts' gave developed, including fire eating and fire breathing.

Nevertheless, this type of jugglers will only accept their death if they achieve nirvana once in their life. The only way to get into it is to execute a strict ceremony known as 'eating the apple', which involves ingesting one of their 'Juggalos' publicly. This sacred act can only be reached after years of (outlaw) training, under the guidance of the High Masters of Anti-gravity. These are said to be able to toss themselves up in the air using only their hands. Rumours are that stage diving was invented in the Sixties as a mere exercise for a High Master to-be who happened to be a Rolling Stones fan.

Until 1832, practicing juggling was legal in most of the western world. In some areas you could openly practice juggling on the street. Around that time a group of jugglers called 'The Insane Clown Posse' started to use juggling for their demonic rituals involving teenage virgins, cemetaries, and lots of blood. The rumors about this group spread quickly across the villages and towns and even reached Europe. In the evening of October 14, 1833, a group of jugglers went on a bloody rampage across Culombranda. They killed approximately 650 individuals, leaving a single bloody club embedded in each corpse. After this massacre the practice of juggling becamse completely forbidden in most of the western world. 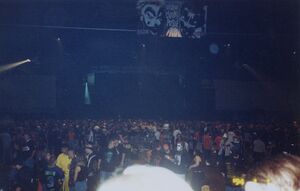 The 1984 New York juggalos gathering. As you can see the juggling-items are well hidden.

This is still the situation today in most countries, however some countries begin to understand the positive effects of juggling on the psyche. Hence, some countries stopped punishing juggalos, and simply confiscate their juggling-items. Some countries conduct raids on places known to contain juggalos. The biggest raid so far was conducted in New York on April 23, 1984, where approximately 1300 juggling items were confiscated.

Juggling tricks are different ways of throwing jugulars. Usually the amount of jugulars being juggles ranges from 3 to more than 3. Usually jugglers start by juggling the higher numbers and work their way down to 3. The best juggler in the world is currently perfecting 2 balls, but there is much controversy as to whether his record should count due to his extra arm.

Butter fingers: This is the most common juggling trick performed by amateur jugglers. It involves throwing balls and dropping them frequently.

Walk the dog: This consists of throwing 27 balls in the air, walking the dog for at least half an hour, and then catching all the balls. Sometimes the last ball is caught in the dog's mouth.

Eating the apple: This is recognized as the hardest trick. It consists of juggling 2 balls and one apple. Every now and again, a bite is taken from the apple. Immediately after the trick has been done, the juggler must take a seed from the apple and plant it in his back garden in order to be eco-friendly. This trick is often considered the most dangerous as many beginners accidentally take a bite out of a juggling ball and get lead poisoning (all juggling balls are made from lead).

Around the world: In this trick, all balls are thrown into orbit. The juggler must then wait, holding his arms up, for the balls to come back down. This trick has never yet been completed.

Pi: This trick is the basic butterfingers trick but performed with exactly Pi balls.

Three Ball Flash: This trick involves just one juggling ball and utilizes the jugglers own balls to make up the standard three.

Air juggling is a growing form of juggling. It is much like air guitar in the way that anyone can do it. It is the art of juggling without any balls (the air-juggler may have balls, but must not juggle with them).

In order to air juggle, you must first declare the number of 'air balls' you're juggling with, and then furiously move your arms around as if you were juggling with solid balls. Most people consider air juggling to be better than regular juggling as it is more artistic and usually more difficult.

The most air balls to ever be juggled at once was 746 by Mr. Joseph Ray Jordan, an inmate at the corrections facility in Terre des Hautes Indiana who is currently in jail in Indiana on a 40 year sentence, for harassing an ambassador Mr Jordan currently holds the world record with air balls and he is the best air balls juggler in the world with juggling 8 air balls for a solid 11 minutes. Mr Joseph Ray Jordan pka Joey the Juggler also holds the world record in juggling the most socks at the same time. He will appear after his release by winning his appeal, because he didn't really harrass the Ambassador that bad and it is not worth 40 years, -with his 8 ball sock juggling world record at the WJF Competition 2016. (World Juggling Federation)

Mr Jordan started Air juggling in the USP Illionois, because he didn't have any juggling balls to juggle, so he decided one day to juggle with air balls. Air juggling has commonly been a relatively safe sport, until in 2006 when people started juggling air-chainsaws, air-swords, and air-rifles.