It is the only legal newspaper on the Isle of Wight (see Company History).

It is listed in the Guinness Book of World Records as the only local paper where every single local resident has found fame in its pages (thanks to the County Press's unmatched coverage of court prosecutions). 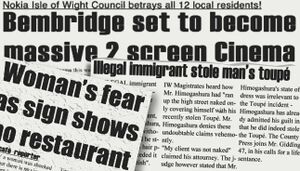 The paper has a central place in life on the Island. All political debate and procedure is carried out through the County Press and important policy decisions, such as whether to have a very tall but narrow school instead of a very wide but flat school and which unsavoury ethnic group (any group consisting of people unable to trace their heritage back on the Island for 93 generations) to hate next, are discussed on page seven. In addition all announcements, opinions and musings of Islanders must by law be posted in the County Press for public scrutiny. As a result no-one talks on the Isle of Wight, communication consisting solely of the County Press and a series of obscene gestures between contributors.

Under UK law a company can be recognised as legally being a person which resulted in the strange election of 1992 where the County Press was, due to mistyping of the ballot paper, elected Governer General of the island. Since then the Editor of the paper has ruled the Island with an iron fist. One of their earliest law changes was to make the County Press the only legal newspaper on the Island (see Interesting Facts).

The paper was taken over by Nokia in 2002 when the mobile phone company began its take over of all things Wight, due to the Island's strategic military value (the Island being the home port of the UK's nuclear deterrent submarine fleet). Since then all Island residents owning or using other electronics brands have been named and shamed in the papers hallowed pages.

The paper is no stranger to controversy. One recent complaint of Wight residents is that the newspaper font is too small for 99.9999% of its readership to read without their bi-focals. This has resulted in fifty years of letters to the editor, mainly on whether 128pt or 129pt fonts should be used. This has resulted in almost complete polarisation of the two sides and fierce fighting across the island. The prolonged pitched battles along the cliff top path between Sandown and Shanklin have caused large parts of the cliff face to collapse and most recently the local watersports centre was burnt down when one side used incendiary ordinance to try and re-take the tactically important Littlestairs steps nearby.

Another area of debate that has raged on and on is the need for a tunnel or bridge to the Mainland. Some claim that this will result in boom to the island economy, with maybe ten or even twenty jobs being created. Others claim that the tourists will just take old fossils, and perhaps the dinosaur relics too.

The newspaper owns the most sophisticated and modern looking website in the world, iwcp.co.uk boasting video and photo updates to the minute and is also one of the highest ranked websites in the world, just a bit behind Google.com.

The weekly comic done by Besley is pretty average to be honest.

The tagline to the newspaper is: Isle's always wight, and you're wrong.