HowTo:Rearrange the deckchairs on the Titanic 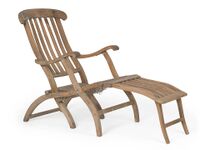 A deckchair requiring re-pointing and a quick shine..

Good evening crew of the RMS Titanic. My name is Scuttlebutt, Sidney Scuttlebutt. I am the head of the exterior furniture section on this ship. My job is to provide deckchairs for the comfort of all First Class and Second Class passengers. Third Class passengers are not entitled to deckchairs so you will not need to show them how they work.

This may be the Titanic's maiden voyage but I am already a professional at the art of deckchair maintenance as I have worked on the Titanic's sister ship RMS Olympic. I believe a carefully prepared deckchair with the option of a blanket and cushion is essential if travellers want to take in the cold April air of 1912. So I will now demonstrate what we do.

These are not First Class Passengers. Check their tickets!

What was that? You want to know more about the lifeboats?? We can talk about that tomorrow. Those boats are to rescue people at sea, not the people here as this ship is unsinkable, made of steel that is light enough to float. There is no need to be worried. For those who really want to learn more about lifeboats, I understand Captain Smith will be holding a class tomorrow.

What was that at the back? Something about an iceberg. Oh yes. Well technically we have hit an iceberg but the deckchairs will need to be set up again and facing the moon as it is now night. So we must get on. I understand we have about two hours to do this properly.

This is not a slovenly ship. We keep our deckchairs in storage at night or during stormy weather. Passengers cannot take them to their cabins. These deckchairs are the property of the White Star line. Thank you. All crew are expected to help a passenger to put up and correctly adjust the height of the deckchair. Our ones are made of solid wood. That is why we also provide cushions.

So now we have brought the deckchairs out from storage. Inspect them to see nothing is broken or hanging loose. If I find any member of the crew not checking them carefully before setting them up I will recommend a deduction in wages that day to the purser. I will now demonstrate how to put them up and you can then follow. 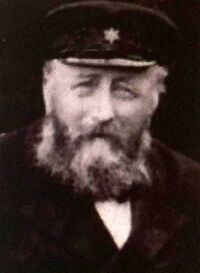 Sidney Scuttlebutt. In charge of the deckchairs on the Titanic.

Is that so? Did anyone else hear the instruction to wear lifejackets? Ah, you did Perkins. Well that's no problem. White Star deckchairs can accommodate a passenger wearing a lifejacket without collapsing. See the structure here? It could take the strain of an elephant sitting on it. Now watch me set this chair up. Perkins can you demonstrate.

Arkwright and Perkins working on the lifeboats after they deserted the deckchair drill.

Perkins? He has gone. I see. I will write that down in my memorandum book. This ship will be here tomorrow and Perkins will be facing a charge of deserting his post. No, don't make excuses for him Arkwright or I will write your name besides his. The lifeboats can wait for now. Our first task is getting these deckchairs just so.

Yes, very good. Now let me see how you all do. I say, didn't we start off with a lot more crew in this lesson about deckchair adjusting? I know Perkins has gone...oh...you tell me Arkwright has left too! This is disgraceful. I am going to write his name down. Those men will be dismissed from this ship when we arrive in New York. If their names were not English I would suggest they were Italians, disappearing from work when there is so much to do!

Come on boys! This isn't difficult. Deckchair drill is so important to get it right. Think of White Star. If we get a reputation for sloppy attention to setting up a deckchair correctly, passengers will go to Cunard and book their berths on the Lusitania. You over there, what's your name. Schmidt you say? Are you a spy?? Well I am glad to hear that you are not. And you are leaving this ship to sail on the SS Amerika. Ah yes, that ship is in our area as I understand. More worried about icebergs than deckchairs.

Now of course if the weather is bad you keep the deckchairs inside. And...what was that Schmidt..and if the deck is horizontal. Yes I noticed that we were dipping down a bit. I have a White Star slide rule which tells me the angle of deck tolerance we can have before we have to return them to storage. 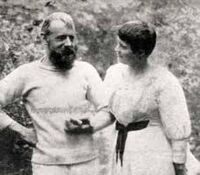 Eric Arkwright and Peter (later Petronilla) Perkins in later life. Yes, they survived the sinking. Perkins later chose life as a woman after the Titanic experience.

So Perkins and Arkwright, you have come back. I have put you both on a charge of deserting your posts during...wait...what are you doing! You can't throw White Star property into the sea! What?? You are doing it to save lives??? STOP! Oh...oh...I felt another lurch. Look, those who want to go to the lifeboats can but I want to ensure the deckchair drill is done propertly. STOP THROWING DECKCHAIRS OVER THE RAIL!! Perkins!!! I am going to find one the Titanic's officers. They carry guns in such just an emergency of crew members vandalising the fixtures and fittings of an ocean liner.

Carry on with the class O'Shea. I will find an officer. Don't leave here until everyone has got it right.

Captain Smith! What..abandon ship? We haven't finished! The Titanic will be remembered for its immaculate deckchair maintenance. Well thank you for everyone attending my class tonight. God bless and good luck.

Now where did I keep that special deckchair...lifeboats..pffft!..Ahhh...they look so wonderful..in..rows...

The body of Sidney Scuttlebutt was picked up a few weeks later. Inside his jacket he carried detailed instructions of setting up and manoeuvring deckchairs on ships. The Scuttlebutt method lasts to this day.