HowTo:Grow your own exploding carrots 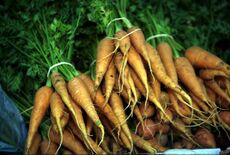 Dumb neighbours. Think they're so smart by trying to steal your garden. And the rabbits! Don't forget the rabbits! Dumb furry bastards!

Where to get the dynamite[edit]

Other than being a dumbass and saying, "I got it from Napoleon", the best place to get it is from Home Depot. Go to the front counter, say "I.W.S.D." (which stands for 'I want some dynamite'), and the man or woman working there will lead you to the hidden explosives room. Ask him if he has any small ones to hide in places. He will direct you to a brand called "Small Killers". Take the largest pack. It kills the most.

If all that at Home Depot doesn't work out and they question you about it, give them $20 and take your shirt off (if you're a girl, then it will work for sure) and they'll give in.

Putting them in the carrots[edit]

Once you plant the carrot seeds, mix the soil with the powder. Be sure not to have any electrical objects. Especially you, with the iPhone that wants to show their friends that they're actually doing it. Then take a lawn chair and wait until the carrots are full grown.

Invite your neighbours over for a carrot-picking-fest. Then tell them there will be a carrot-throwing contest afterwards. They'll all agree to come. It will be a lot of fun. Hee hee hee hee.

Once the carrots have sprouted[edit]

Tell the police that they hated their lives, they wanted to die, because they got no iPhone and that they committed a suicide.

If you receive a bill about damage and deaths, give the police a bullshit letter indicating that a man named Roberto Leonardo has bought your house and that you moved to Jamaica.