A little low on cash? Lost your job? Drug dealing or prostitution not making you enough? Well, its time for the final option: a daring, brilliantly executed bank heist!

This guide will teach you step by step how to pull off the perfect bank heist!

You can't pull a bank heist on your own. You'll need some professionals to execute the plan properly, and if worst comes to worst, lay the blame on. Make sure you can run faster than them.

After you come in the door, you have to break the silence. Be careful about what you say, or no one will take you seriously. Here are some good lines to use after you kick that fuckin' door open: 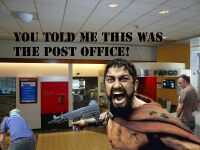 This guy's got the right idea

If you rob a bank, sooner or later the authorities are going to show up. Thats why you brought the guns. Hopefully you haven't wasted all of your bullets on innocent bystanders (or forgotten to LOAD the guns in the first place) . If you have, throw office supplies and yell profanities at them.

If you did this right, you wouldn't need one, but you fucked up. You killed a hostage and/or one of your crew (hopefully not the driver (I mean, its not really cool to kill anyone in your crew, but the drivers the most important (next to the mastermind (which is you (hopefully))))). Distract the police with a donut or something, then run out the door as fast as you can, but faster. Be sure to break something on the way out. Go out to where your driver is waiting. If the locksmith can't run fast enough, fuck him. Drive away.

This is why you pulled a bank heist. You're wanted by the authorities, and killed a few (dozen) people, all in a few hours. Give yourself a pat on the back(or on the butt if you roll that way, I'm not judging you). Now that you have the money split it among the crew. Or be a douchenozzle and kill all of them so you can keep all the money (careful, your crewmates might do the same).

Get used to it

You're wanted for armed robbery, and most likely murder. Time to get out of the country. Canada is not an option, because... well, because it's Canada. Therefore, your first choice should be Mexico. Get used to speaking Spanish and eating tortillas, Senior Estevez.