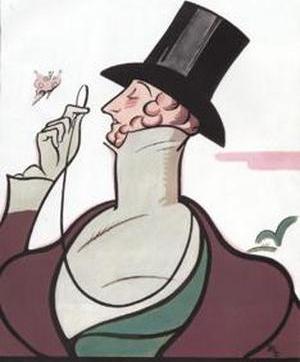 The connoisseur in traditional garb.

Becoming a connoisseur is easier than it looks. It doesn't matter what one intends to become a connoisseur of. From fine wines to antique doorknobs, the technique remains the same. Indeed, the only real variable is the subject matter. Let's try a basic exercise. Pick a subject. For the sake of argument let's say you picked Hall & Oates songs as your area of connoisseurship. Say aloud to yourself, "I have a greater appreciation for the rich and varied work of Darryl Hall and John Oates than anyone else in the world". There, you're well on your way to being a connoisseur of Hall & Oates songs. The most important part of being a connoisseur isn't having an admirable base of knowledge on a particular subject. Rather, it is convincing both yourself and the people around you that you are better able to appreciate your chosen subject than anyone else. It is assumed that because you have a greater appreciation, you must also have a greater knowledge base. Let us pause here to laugh haughtily at these fools and their mundane assumptions that play so well into our plan to appear more worldly than they could ever hope to be. On a side note, you'll want to practice your haughty laugh a bit as you'll need it later on to express disgust and bemusement towards non-connoisseurs.

As was previously indicated an extensive knowledge base is not a requirement for connoisseurship. A very basic, bare bones, knowledge base is, however, recommended. Though, as we'll see later some advanced connoisseurs can make do without even this. To start with, do you know what in blue blazes your subject actually is? One of the responsibilities that fall on the shoulders of the connoisseur is answering the boorish questions of non-connoisseurs, from here on referred to as "Idiots". When faced with questions from idiots it certainly won't do to be stymied by this kind of information right off the bat. While the adroit connoisseur can parry and dodge the idiot's questions for a time with pronounced and venomous disbelief at their ignorance, he must eventually divulge some kind of evidence of his connoisseurship. So, pick a topic you're at least somewhat familiar with, something you've experienced first hand, seen on tv, read on a fortune cookie, sucked down, etc...

Now that you've got a topic you know something about, it's time to develop a sense of self-righteous indignation. Find an idiot. This shouldn't be hard they're everywhere these days. Now, look at him, look right into his beady little eyes. What do you see? I'll tell you what you see, you see the antithesis of everything you stand for! The very fact that this peon has deemed your area of connoisseurship not worthy of appreciating is proof that he considers it a waste of time, useless, frivolous, idiotic. Are you going to take this from him?! You've devoted you're entire life to the study and appreciation of Hall & Oates, and this... this... miserable little toad laughs at you, his disinterested expression mocks you and your life's calling. Give into your aggressive feelings, boy! Give into your anger, Let The Hate Flow Through You!! STRIKE HIM DOWN!! PROVE TO ALL THE WORLD, ALL THOSE WHO LAUGHED AT... Hmm, uhh, right, sorry, got a bit carried away there. Disregard the whole bit about hate and striking him down and what not. You haven't struck him down yet, have you? If you did you'll want to go here, if not, then let's continue. Basically, what you should have taken away from that exercise is that as a connoisseur you have the right to be indignant towards anyone, over anything. There's no particular reason for this, it just comes with the territory. In any event, this indignation puts you above reproach, and can help you avoid having to answer most questions. Armed with this indignation, a passable knowledge of your subject, and having convinced yourself that you are, like the Pope, more or less infallible, you are now fit to call yourself a connoisseur. Congratulations, start printing business cards, and prepare to do battle with the unworthy.

Now that you have the basics covered, you're ready to try some real connoisseurship. But before you get too excited, there's a grim new reality you must face. In all likelihood, you are not the only game in town. Yes, there may well be other connoisseurs about to spoil your fun. And, much like the Highlander, when it comes to connoisseurs there can be only one. So, unless you've chosen an especially obscure topic, see Aglets, you're going to need to be able to thwart these foppish knaves. This is usually accomplished with equal parts disdain and escalating boasts. If they claim that Brazil has the loveliest swamps this side of Neptune, counter this with a haughty laugh (you have been practicing haven't you?), and say something to the effect of "Well, then you've obviously never been to Venezuela". Follow this by silently praying he's never been to Venezuela. If he's an accomplished connoisseur he'll lie and say he has. Follow up by narrowing focus, ask him where he visited in Venezuela, pin him down. Then claim that wherever in the country he didn't claim to visit has the loveliest swamps in existence, even if it's downtown Caracas. How would he know, you just got him to admit he's never been there. More haughty laughter here.

Congratulations, you're now a real connoisseur. You can claim to be more learned and more worldly than the beady-eyed John Q. Scofflaw standing next to you. You can be considered a master of whatever topic you care to. Except of course, connoisseuring, on that topic you are clearly not a connoisseur. I mean, have you even read The Consummate Connoisseur by T.H. Houghton? No? I didn't think so. *Laughs Haughtily* Now clear out you pretender to the throne and do your connoisseuring elsewhere.