Hello there and welcome to ones guide on How to be Antarctican!!. The Antarcticans are an amazing, peaceful People, living a simple life of Looking after their families and fishing (A lot like living in Iceland, but to the extreme). Anyway lets begin

This step is vital if one wishes to be Antarctican Person. Antarctica is where Antarcticans live. Unlike other countries, The Antarctican government is surprisingly laid back and will not mind if people move into Antarctica without a passport. In fact, the Antarctican people don't even have passports (Because they're so peaceful). First off one must not back any of their belongings. Antarcticans usually don't have any belongings and just waddle about looking for food (Peacefully). If you wish to be a true Antarctican then one must wear nothing...But a tuxedo. One must wear this tuxedo at all times, even whilst sleeping and swimming (More about swimming later). This is a vital part of Antarctican culture.

When you first move to Antarctica, do not let the cold climate discourage you!! Living as an Antartican will pay off. (Despite the entire Continent being the coldest place in the world, and being covered by at least six inches of snow or ice in any given place). Oh and I forgot to mention earlier, Remove your Shoes. Real Antarctican people dont have shoes. 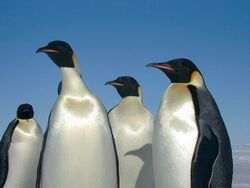 Learn how to get food[edit]

Antarctican cuisine is one of the most simple and peaceful cuisines in the world. Their diet is almost completely made up of fish. (What... its not that odd, Look at Japan, Antarticas like that, only more peaceful). All antarticans eat fish, But due to the lack of Supermarkets (and buildings in general). Antartican people have to get fish themselfs, So they go Fishing!!

Once in the water, If the shock of the abysmally low temperature hasn't already killed you, then it must mean you're a true Antarctican person!. But besides that you must look for fish. Make sure you keep with the other Antarctican people. The way to swim like an Antarctican person (I told you that there'd be swimming) is to do this, Flap your arms as if you're flying and just keep your legs straight. This is the way they swim in Antarctica!!. (Please do not be stupid and take of your tuxedo whilst swimming, Antarctican people are too peaceful for swimming without tuxedos).

Once you have found fish you must swim after it. Quickly!, if you do not swim quickly the fish will get away. Once you have caught up with said fish you must catch it...In your mouth (well, what did you expect?) Once you have caught the fish, Kill it so it doesn't get away!!. Most Antarctican people kill their fish simply by biting down on them (They're too peaceful to do it any other way). Once you have done this start swimming your way back to land, Whilst you are swimming back to land, Eat your fish there and then. Then well done!!, You have mastered the Peaceful art of Antarctican fishing.

Once back on land, look around for a young Antarctican child (Antarctican children can't fish). Once you have found one promptly throw up your fish, into the mouth of the Antarctican child (What? you didn't think that fish was for you did you?, that is how Antarctican people carry food, what did you expect them to use sacks or something? I think you have culture shock).

Once you have done this, Do it all again, and again. In fact, keep doing it until you die, For that is the Peaceful life of the Antarcticans!!.

Do enjoy your life as an Antarctican!!