Grolsch is The King of Twente in the East of Holland. In this region all the people worship King Grolsch except losers who prefer to worship the inhabitants of Heineken (puking). One of the most regular worshippers were the members of Grolsch Royce. Untill 2006 they were an example for Twente and the people of Noord-Deurningen. In 2006 they committed a group suicide after they lost a Grolsch-drinking contest from Infusix. King Grolsch is also known as 'Gold uut Grolle'.

This is the King had almost been killed in an attack at one of his palace's. On 13 mei 2000 a rival Kingdom tried to bring down King Grolsch. Some people suspect the dictator of the republic of Bavaria, in Dutch also pronounced as 'Bah-varia', and of course because he stinks! In the town of Enschede they turned off a bom made of fireworks. 22 people died and King Grolsch was seriously injured. But after a well recovery he came out better than ever. He build a total new palace being the most advanced palace of the world in town nearby Enschede, called Boekelo, were he lives happilly ever after. 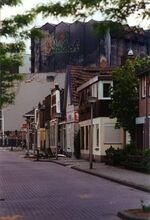 The King has a big family. One of his brothers is named "het kanon" (the cannon) and his sister is called "Blond of Mietje" (Blond or Sissy). His family also extends to the United Kingdom and includes the infamous twins Matt and Luke Goss a.k.a Bros. Also there is George Bush, who regurlarly spikes his Grolsch for fun

King Grolsch was born in 1615 in al little town called Groenlo (Greenloooo) and his kingdom was very small. During the years he expanded his power throughthe region. In the twentieth century he wanted to expand his kingdom throughout the kingdom of the Netherlands. Therefore he came with a famous saying: 'Vakmanschap is Meesterschap'(craftsmanship is mastery).

King Grolsch is a very smart man. He invented a bottle for people who are too lame to buy a bottle-opener. This is called "de beugel" (the brace). Orthodontists have to thank the King for this invention otherwise they were unemployed. The invention is now used by beer drinkers. King Grolsch wants to dissociate his kingdom of these stupid people! In his opinion drinking beer harms the society and should be forbidden.