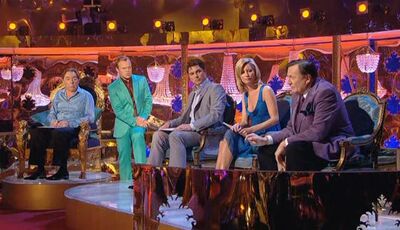 Oliver nervously walked over to the side where the esteemed judges were sitting. Graham Norton met him there. "Ladies and Gentlemen: Oliver! They really love you in the building," said the flamboyant host, "Let's go over to the judges. Judges: Oliver was trying to show his hunger in tonight's performance. Did he achieve that?"

John Barrowman was the first to talk. "Oliver, I've had my doubts about you. We've talked before about how you need to bring more of your own personality into the performance and create an emotional connection with the audience. Tonight, I thought you were FANTASTIC FANTASTIC FANTASTIC!!! You gave me the emotion, your vocals were spot-on and I really believed that you wanted moh. You could be Oliver!"

Andrew Lloyd Webber, the musical supremo whose show is being cast, sat up in his chair, as if he had something important to say. "Oliver, I'm in an interesting position, here. On the one hand, I've got a television show to do and we're supposed to string this competition out for several more weeks, but on the other hand, I've just watched this most remarkably brilliant performance with you convincingly asking for moh and I find myself thinking "Forget this show, we don't need to search for our West End leading man any more". I've made my decision. You are Oliver!!"