A tragic image taken a few years back, when an EWB user, against all advice, attempts to access 'the real world'. Poor Cade was never the same again, although the chair was successfully removed.

Extreme Warfare Battleground was originally the official/unofficial forums for the Extreme Warfare series of PC games, created by the evil overlord Bill Gates Adam Ryland. It quickly became its own unique entity, and outgrew its reputation enough to survive, and yes, thrive even without the EW series support. The Battleground itself has gone through many iterations, each with their own special memories, but the legacy of EWB is being destroyed as we speak. In the beginning EWB was a place for the truly cool, purely awesome and vaguely sexy personae of the World (Wide Web) to hang out and prove that they are better than everyone else. The Battleground was proficient at this, and soared on its new rep for some time, until The Incident, which changed everything. 95% of EWB is blatant homosexuality, with a sprinkle of racism and a hint of elitism, and that's before everything went arse over elbow. Many visitors have come and gone, turned away by disgust and wondered in the back of their minds exactly what EWB had to be elitist about. The debate rages on in classrooms all over the world, but so far no one is brave enough to put forth a theory.

Ah, EWB. Good old EWB, where men were real men, women were real men, and small furry creatures from Alpha Centauri were real fake women; where good times were had by all. The board was a hub of activity, intelligent discussions and creative expression. The Ring was filled with news, opinions and ideas, all equally discussed, and argued. But they were argued intelligently. Names like 'Vince Russo' were mentioned with a whispered awe, as arguments raged on as to whether Chris Benoit could take KENTA in a shootfight, whether Triple H was truly trying to hold down Chris Jericho and whether or not they should go and fuck Dukes. This became a matter of important discussion, and recently the line of thinking changed from whether they should fuck Dukes, to precisely how hard they should fuck Dukes.

The Diary Dome Hall Of Fame

The Diary Dome was built around the EW games by the best of writers, and policed by the worst of Clinjas, as a place where people could tell their game's story and show it for the world to see. Many spent all of their time at EWB in the Dome, reading and remembering the great stories being told, and those with a coherent grasp of the English language (barring nabeel) was welcomed to tell their own. Many stories are favoured among the EWBers, but a handful were able to reach that special plateau, that highest of honours, whence the very mention of their name inspired memories of genius booking, inventive writing and emotional hilarity. Stories such as reversefigure4's LAW, Plankton's IWF and conniption's GBW were hailed as being of the utmost quality, and should share not the same inferior forum as such disgraces as Blazing Glory, sirdavinator and batsman, and so were inducted into the Hall Of Fame, whose hallowed halls are reserved only for the best of the best.

The Lounge, often referred to bizarrely as The Longue, was a mixed bag of nuts for many EWBers, but was generally agreed upon as being bloody fantastic. It was a place for people to kick back and relax, possibly with a fine wine or a near beer, and reminisce on hilarious happenings, physical health problems (Of course, EWB also serves as a doctors clinic, offering its members excellent facilities and medical knowledge and advice for the low low cost of $9.99)and general e-penisness. This was the third incarnation of The Lounge, and the third incarnation of EWB, but it was in this forum where most of The Incident proliferated, and where most of the battle was fought.

The Incident is fully justifiable of the capital letters, and it began on a rainy day at the Donation Station. Head Honcho and VP-In-Charge-Of-Sexings Kobra had shared with the rich and upper class EWBers some free music, much to the dismay of his evil adversary and resident German, Michael 'Hitler LOL' Matzat. This did not go unnoticed, however. The Man was watching, and as always was looking for ways to hold down the innocent members of the board. The Man had been a thorn in EWB's side for a long time, and saw this as an opportunity to finally rid himself of the coolest motherfuckers around. He hatched a plan so devious, so, so...cunning. you could put a tail on it and call it a weasel. He decided that the music was illegal, and breached the terms of contract EWB had agreed to, and used this to try and shut down the board. The fight was taken to The Lounge and displayed in public, where the commoner EWBers revolted. And by gawd was it revolting. Arguments raged all over the place, and many mercilessly attacked The Man. Eventually, after his false truths fell down like the decimated bodies of bad debaters/insulters, the fact that the music was indeed as free as his mother on a Friday night was revealed. The Man fled, hiding his tail between his legs and abruptly cut off access to EWB.

The plan, however backfired. Countless EWBers roamed free around the interweb, without a haven to congregate at, and found many replacements, none of which were up to the standard. Boards rose and fell, including hastily made new EWBs by stupid people, EWB allies like Seans Site, and it even spread to EWB's worst enemy, the notorious.400 Software Studios. The .400 massacre, as it came to be known, started innocently enough. Most EWBers were simply looking for a place to rest, but soon enough, a member of the excommunicated showed up, one who had been banned by EWB. He made the mistake of insulting the Battleground, because while he had a few friends to back him up, he had just insulted tens upon thousands of angry, tired assholes. They never stood a chance when the evillest man on the planet entered the fray...Koutler. Koutler and his partner sycodmn proceeded to pillage the board, but the .400 defense was so bad they resorted to insulting each other as a means of entertaining themselves. Such was the intellect of the average EWBer! All the while, Kobra, Marsh and others were quietly putting together a new board, a new refuge, a new Battleground...EWBIV. 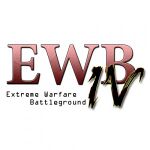 A proposed logo for the new Battleground.

And so EWB rose from the ashes like a Pheonix, sticking two fingers up at The Man. The Man himself was never heard of again, though he was rumoured to have been Saddam Hussein, looking for something to do whilst hiding in his hole. EWB flourished, and is once again the most kickass place in the electronic world. Many classic posters have come and gone, and many new posters have arrived to plague the board with stupidity, refusing to be flushed away like the turds they are. These new posters, with their stupid names like 'Corruption', 'CRAZY-X' and 'TheMick' are destroying the board, bringing down the average IQ of the board with every post they make. The Ring is full of nothing but bitching and moaning, and despite valiant efforts by Zero, and others, continues to be covered with shit. TGC and a bunch of his gang - 'Cloudy', 'Ringo Masterson' and others - make meaningless topics flaming new members that clog the board up with shit. Could EWBIV be the last iteration of the Battleground? Is the deluge of retards proving too much for the great members to deal with? Will Sousa, naiwf, C-Mil, and all the other elitist pricks continue to piss other members off? Is Be really that fucking stupid or is it just an act (NB: the results were later confirmed from an independent test that it wasn't an act)? Will Krycek get the last laugh after all? Will Potato Head make a joke that is acknowledged as being 'funny'? Don't be fucking stupid, all they do is give boundless opportunites for vets to prove exactly why Extreme Warfare Battleground is the Best Place In The Universe. No matter what Maddox has to say in the matter. LL gobbles on Gazz's penis, but also rules!