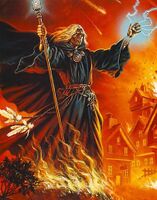 Image of a Drow learning to use Force Lightning!

For those without comedic tastes, the "questionable parody" of this website called Wikipedia have an article about Drow.

Drow originated in the year of 666 B.C. when all the elves of the surface got together for a "find the sexual position which produces the ugliest babies competition." The event was an extreme success. An ashy bluish black skin replaced the perfect white elvish skin, and the blonde highlighted hair common to all elves had become a white stringy mess. The new race was given the name “Drow” because none of the elves cared enough to make up a better name. Most of the Drow are mightily pissed off when they discovered this origin, as the elves had tricked them into believing they had actually spawned from spiders, and this made them look like fools. This was the beginning of the Drow Wars.

The Drow Wars lasted 3 days. Mostly because the elves were led by Legolas, who can kill ten men with 3 arrows while sliding on a shield down an elephant's ass while the elephant is jumping off a cliff, and the Drow were led by Drizzt Do’Urden who, unlike the other Drow, was the bastard result of Chuck Norris' trip to Africa. Drizzt fought valiantly, but since Drow can only see in the dark, Drizzt soon found himself alone in hostile territory. He retreated by taking a short cut through the elves headquarters and killing everyone inside.

Drow resemble androgynous twelve-year-old girls with ashy black skin and stringy white hair, because apparently white is scary in Japan and Gygax was shooting for something that could appeal to the bubbly, oversensitive emo community of D&D-playing teenagers. They generally are depicted (*cough*deviantart*cough*) wearing fruity colors that don't even come close to fitting in their spectrum. Shit like purple, blue, yellow, orange.... Purple.... Pink. They generally have ancestry relating them to huge heroic figures of the geek universe. On a related note, most of them are generally Half Demon/Angel/Dragon/(High) Elf/Human/Cat person, and really anything that makes their backstory sound more "woe is me". Drow names include Cloud Strife, Sephiroth, Legolas, Drizzt, Blizzit, Elric, and Steve. That, or really anything with apostrophes, like St'eve.

Despite the obvious vanity shown even in their names, Drow are not the most vane creatures in the universe. Elves are. The Elves of the surface realized that human males would never leave them alone if they found out about the annual "find the sexual position which produces the ugliest babies competition." Human males have a thing for pointy eared girls who think they are better than them. The elves decided to cover up the competition and claim that the Drow went into the cave on their own and are related to Michael Jackson. Legolas was so upset that the competition was cancelled that he fell in love with a dwarf and followed him all around the world over a matter of jewelry.

Unfortunately the Drow discovered the dark side of the force and spiders, taught to them by one Darth Maul, who wanted to be in a world where no one had ever seen Episode 1 and where people with lightsabers didn't cut you the F*** in half. Darth Maul grafted the top his severed upper body to a giant spider, got a sex change and called him/herself Lolth. Some of the Drow have copied Lolth/Maul and are called Driders.

Drizzt Do’Urden was very jealous of all the attention to Lolth was getting and left the cave to find a girlfriend. To cover his ashy skin Drizzt wore a big coat. One day Legolas found Drizzt beating up 1000 orcs at a time.

Legolas : *walks up* Hey. Woah, is that an army of orcs
Drizzt Do’Urden : Oh, nevermind those losers, Wizards of the Coast would lose too much money if I died. I'm invincible due to author's convenience *kills 50 orcs with a blade of grass* Wait a second, you're Legolas aren’t you… Prepare to die! *draws twin scimitars*
Legolas : Oh shit, he's way too close to shoot with my bow. Stay back or Guenwyvar gets it. *points arrow at stupid giant extradimensional panther thingy*
Drizzt Do’Urden : *starts to cry* Give me back my kitty!!!
Legolas : No.
Drizzt Do’Urden : *Crumples to his knees and cries rocking back and forth* But I want my kitty back. She's my bestest friend. My life sucks without a stupid pet to read my poetry to.
Legolas : *leans on a tree* You know, if you wrote it all down I bet humans would buy the book. Humans will buy anything.

And that is how Drow got its name...