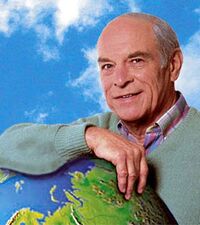 He is out there, watching your every experiment. Some speculate that he may be the legendary God, God with a thirst for Science!

Don Herbert was the star of the hit television series "Mr. Wizard's World" which started production in 1983 and continued for seven strong seasons. This show allowed children to experience the pure mystery and magic of discovering everyday science in the comfort of their own homes. Some publications claim that Herbert's television career actually began in the 1950's where he starred in Mr. Wizard produced by NBC, targeting pre-teenage youth with anti-communism propaganda. Needless to say these allegations are purely speculation.

During the last episode of "Mr. Wizard's World," Don Herbert was demonstrating the chemical reaction between baking soda and vinegar when the experiment went fatally awry. That's when the madness kicked in, resulting explosion left by the studio in complete ruin, and the surviving crew was thankful to be sane. Due to the intensity of the flames, Don Herbert's remains could not be ascertained from the ashes, though eye-witness accounts clearly indicate his tattered sweater burning in the fiery rubble. Although an extensive analysis of the debris yielded no clues as to the fate of Don Herbert, it was solemnly accepted that he perished that day.

"Everything happened so quickly, I can barely remember..." states one of the surviving child co-stars who experienced the devastating cataclysm firsthand in an exclusive interview. ”One minute he was showing us the mystery and magic of science and the next thing I remember is everything being on fire," she weeps, "and so much screaming!"

In the summer of 1994, Canadian Mountie Jacques Benoit thinks he might have had an encounter with the elusive wizard. He was investigating a series of strange reports of disappearing pies from window sills and trousers stolen from clothes lines given by the locals. "It just strolled up here and took it!" claimed one distraught citizen while another exclaimed, "It looked like a goddamn Sasquatch!" This leads to a possible connection between the legendary Bigfoot and the missing wizard, validating the existence of a "missing link!" 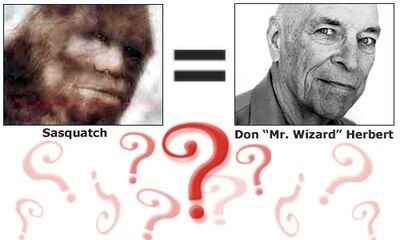 Upon further investigation, Benoit happen upon a badly scarred, apparently schizophrenic transient. His disfigured body was wrapped in a tattered cloak while his right arm seems to have been replaced with a prosthetic limb consisting of paper cups, string, construction paper, and a small vial of colored water. All questions were met with nonsensical mutterings as the man scavenged for more common household items to add to his collection. Medical officials were called to the scene, and upon arrival, were baffled by the "artificial limb." The man grew increasingly agitated when the limb was inspected. One EMT off-handedly commented in reference to the arm, "What is this?" to which the man exclaimed the only intelligible phrase he had yet uttered, "Supermarket Science!" 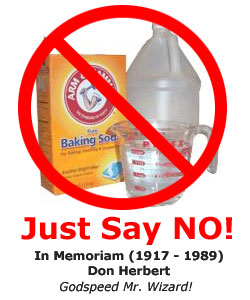