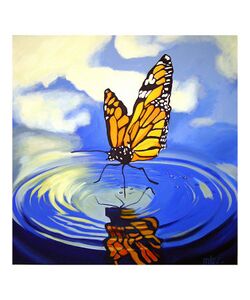 A butterfly starting a war in some African country. What a bastard eh?

“Cause and effect. I drink-a too much wine, I need-a to piss.”

~ The Merovingian on Causality

“Oh shut up, we heard you the first time.”

Causality, or causation, is the flow of events from cause to effect. Causality was invented at the Dawn of time, and has been used ever since to allow us to say things like "has been used ever since". The concept was good, but the quality of causality has been going downhill due to increased activity of time travelers. Fans of causality have classified time travelers into two categories: Assholes and Total Dicks.

Causality and time travel are mortal enemies. It was once thought that breaking causality through the use of time travel would cause a paradox that would destroy all of reality. Further research seemed to show that paradoxes just cause relatively minor disruptions, which reality can eventually repair. This was also false. The truth is somewhere in between - some damage is repaired, but repeated breaking of causality results in more and more nonsense. Eventually events will become so scrambled that things will happen for absolutely no reason.

Even if you try not to change anything, you've damaged causality just by being in the wrong place at the wrong time. This qualifies you as an asshole, but it won't do any lasting damage.

Anything that leaves an effect without a cause is a major Fuck-up. This includes objects that were never made, and people who are their own parents. These do lasting damage to causality. Causing a Major Fuck-up qualifies you as a total dick.

Nested Major Fuck-ups. Paradoxes within paradoxes. Creating a situation like this probably causes you to retroactively cease to exist, so I won't bother calling you a nasty name.

A Brief History of Causality[edit]

What can I do to help?[edit]

It's simple. If you see a time machine laying around, don't touch it. Whenever you do anything, make sure you do it in the correct order - for example, when making cereal, don't eat it and then prepare it.

Remember: Cause then effect.