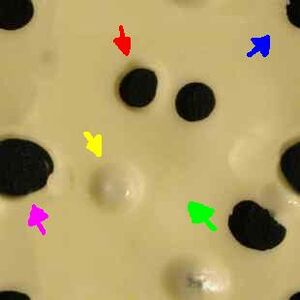 It's a question that we all ask ourselves at some point; just what is catastrophic time failure? In a nutshell it's when idiots fuck up the time stream with excessive back and forward time travel resulting in events becoming displaced or just generally fucked.

During the advent of time travel no one contemplated the dire consequences of repeated ripping of the time stream's delicate anus but now it has become a very real fear.

Catastrophic time failure has only occurred once in the history of the universe; it occurred simultaneously in the 1960's, 1990's, 65 million years ago, and the year 6,000,000,000 A.D. The event killed millions, among them JFK and Oscar Wilde, extinctified the dinosaurs, and made baby Jesus cry.

The first recorded catastrophic time failure was the fault of Ministry, its band members, Alain Jourgensen, Al Gore, and Robo-Jourgensen went back and forth through the time stream over one million times so as to join every musical project ever invented. They succeeded but at the price of countless lives. Right as Al Gore and Alain Jourgensen began jamming with Beethoven in 2751 A.D. time erupted flinging them into an endless swirling vortex of pain and suffering. While in the vortex Al snapped a photo and brought it back with him when he decided the vortex wasn't really all the interesting in the first place.

What We Can Learn From Their Mistakes[edit]

Ministry made several mistakes during their attempts at joining every musical project ever but in the long run we can all learn from their (gigantic) error, after the catastrophic time failure Time Squad was set up so as to impose the rules that were set forth immediately after the failure, the rules are as follows: (warning: keep in mind that these are the rules to prevent catastrophic time failure, not the rules and regulations of standard time travel, in order to receive your time travel license and utilize it you must know the standard rules, these are guidelines that if ignored can be punishable by instantaneous death)