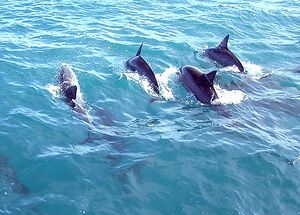 Flock of dolphins photographed shortly before being decimated by a combine harvester.

The Campaign for Dolphin Friendly Sweetcorn is an environmental organisation dedicated to lobbying the producers, canners, distributors, and retailers of sweetcorn to ensure the production methods for the commodity do not harm dolphins in any way.

The organisation was founded in 2006 when it was discovered during the making of a tuna and sweetcorn sandwich that whilst the can of tuna was clearly labelled as dolphin friendly there was no such reassurance on the label of the can of sweetcorn, leading to a legitimate concern that the amalgamated product carried no guarantees of safety for the most intelligent, and cutest, of water based mammalians.

Further checks on pre-mixed tuna and sweetcorn products similarly revealed a lack of reassurance on the dolphin-friendly status of the sweetcorn component. In some cases the labels specifically mentioned the status of the tuna element, leading to suspicion that the sweetcorn is in fact tainted by omission.

The objective of the organisation is to force the producers of sweetcorn to declare the true nature of the effect the production has on dolphins clearly on the label of the tin, jar, or other container. As the campaign points out, “those producers, and their distribution chains, with nothing to hide have nothing to lose by declaring their products to be safe to aquatic mammals. Those who refuse to comply must clearly ring alarm bells in the minds of environmentally astute consumers.”

The organisation has attracted some criticism from the sweetcorn industry with certain producers claiming that the development and implementation of systems to provide assurance of dolphin friendly status sufficient to meet labelling regulations would increase the price of the average can by an estimated 15%. Other industry insiders assert that regular risk assessments carried out by responsible producers and canneries already provides assurance that no dolphins are harmed during harvesting and processing. Nevertheless the campaign responds that if this was indeed the case then the companies involved should have no problem with labelling their goods accordingly.

The campaign advises consumers to check labels on sweetcorn and other products containing sweetcorn that they purchase in retail outlets, and to ask the management to stock brands that are clearly labelled as dolphin friendly. They also ask consumers visiting restaurants, fast food outlets, and sandwich bars to ask their server for information on any sweetcorn used and to boycott products not confirmed as dolphin friendly. The campaign believes that if enough consumers demand dolphin friendly sweetcorn products this will in turn compel the industry to respond, as the tuna industry was forced to do a decade ago. It has also served advance notice that once the battle on sweetcorn has been won it will be moving on to mayonnaise manufacturers, but says its resources are too limited at present to lobby on both issues simultaneously.

The Campaign for Dolphin Friendly Sweetcorn is funded by private donation from eco-minded consumers and corporate sponsorship from a leading producer of pre-packed diced red and green capsicum peppers. This has led to speculation as to whether there are commercial motivations behind the movement. Official literature, however, states that the Campaign will work with, and accept funds from, any individual or corporation with the same ultimate objectives as its own and that current corporate sponsorship comes from ethical sources who have assured the organisation that their own products are 100% dolphin safe.