The Brothers Grimm beat this artist within an inch of his life for "making them look creepy".

“Once upon a time... is starting to get a little old.”

The Brothers Grimm live in Malibu, California, in a large house with their two cats and one wife. They enjoy walks on the beach, pina colatas, and making up stories involving blood and gore. George Howard Smith changed his name to "The Brothers Grimm" in 1987.

Along with the original German works they published, many French tales entered the Brothers Grimm collection through a freelance tale-teller the brothers used as a primary source for their 1816 edition. For a time, it seemed the title "Grimm's Fairy Tales" would finally be correct, as their tale-teller was flamingly queer and provided them with many top-quality French porn stories. Sadly, in 1817 the Brothers were assigned a new editor who encouraged them to actually read the stories they were publishing. Shocked and dismayed that many of their tales were encouraging children to follow their hearts and desires, rather than promoting frigtened sobbing and under-bed hiding, the Brothers quickly removed all of the 1816 copies from circulation, and pruned all true fairy tales from the collection. 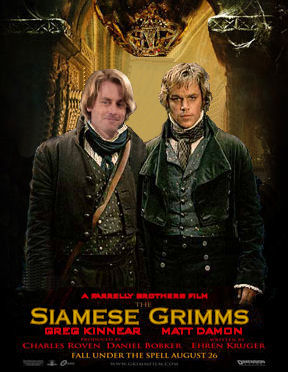 When the Farrelly Brothers told the studio the direction they wanted to go with this they were quickly replaced with Terry Gilliam.